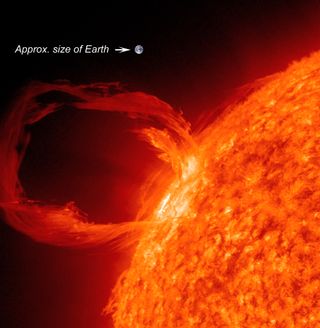 One of the first images taken by SDO and still a favorite: A solar eruptive prominence as seen in extreme UV light on March 30, 2010. The superimposed image of the Earth gives a sense of just how large these eruptions can be.
(Image: © NASA/SDO)

Magnetic storms set off by the sun could pose a bigger threat than thought to weather, communication, military and other satellites close to Earth, with a potentially devastating economic impact, scientists suggest.

In the new study, researchers found that solar radiation can energize a belt of high-energy particles that surrounds Earth more dramatically than previously believed.

The study focused on the possible effects of a particularly strong magnetic storm on the Van Allen radiation belts, the dangerous rings of high-energy particles that girdle the Earth. The belts are split into two distinct zones. The outer belt, which is made up of electrons, reaches from about 15,800 to 31,600 miles (25,500 to 51,000 kilometers) above the surface, while the inner belt, which consists of a mix of electrons and protons, reaches from about 4,000 to 8,000 miles (6,400 to 12,800 km) above. [Stunning Photos of Solar Flares & Sun Storms]

Scientists had known the outer belt could become far more intense during geomagnetic storms caused by high-energy particles spewed by the sun, such as the storm that supercharged Earth's northern lights display Monday night (Sept. 26). However, they have long thought such storms do not affect the inner belt.

Now computer simulations suggest that during a "superstorm" — which has occurred in the past and is likely to recur in the future ? the electrons in the inner belt, too, could become energized. Near-Earth radiation could then remain dramatically more intense for several years afterward.

"The increase in radiation in the inner zone may last for up to a decade and continue damaging satellites for years after a very strong storm," study lead author Yuri Shprits, a space physicist at the University of California, Los Angeles, told SPACE.com.

This radiation would damage satellites in that zone and potentially cut their lifetimes by five-sixths or more. [Related: Space Radiation to Rise for Astronauts, Airline Passengers]

"It would not destroy all satellites at once," Shprits said. "However, at least according to our calculations, a very strong storm can increase the radiation dose in the inner zone by a factor of 10, and within a few years we may lose a significant portion of the satellites that traverse the inner zone."

In terms of new strategies that might be needed to protect satellite systems, "it's hard to say," Shprits said. "First of all, we need to estimate risks and estimate cost. If cost is too high, we may want to accept the risks and start getting ready to replenish the fleet in the case of such event."

"There are a number of rather expensive strategies that can be used to mitigate the risk, including redundancy in electronics and increased shielding," he added. "Zero risk means infinite cost."

The scientists detailed their findings online in the Aug. 25 issue of the journal Space Weather.