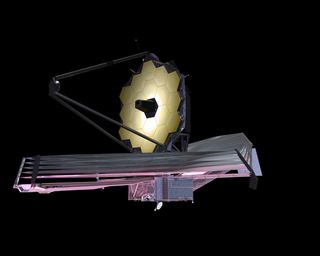 Supporters of the James Webb Space Telescope united today (Sept. 21) to advocate for the ambitious project, despite its increasing costs and repeated delays.

Some of the project's staunchest supporters, including the telescope's senior project scientist and NASA's program director for the mission, made the case for James Web during a web conference hosted by the Space Telescope Science Institute in Baltimore, Md., which will serve as the Science and Operations Center for JWST.

"I invite people to try and imagine today where astronomy would be without Hubble, because my expectation is that JWST will be transformative in a very similar way," said Roberto Abraham, an astronomer at the University of Toronto. "When I think about where I would be and where my field would be without Hubble, I want to run away screaming. I just can't conceive of giving up that sort of capability with JWST for the future." [Photos: Building the James Webb Space Telescope]

The James Webb Space Telescope, a general-purpose infrared observatory, has been billed as the successor to the Hubble Space Telescope. Yet repeated difficulties have pushed its launch date back to 2018 and its budget up to $8.7 billion, at latest count.

The telescope will feature a 6.5 meter primary mirror that will allow glimpses into some of the farthest reaches of the universe. Proponents say it offers the chance to make huge breakthroughs in the study of star and galaxy formation in the early universe, the mysteries of dark matter and dark energy, and the search for planets around other suns. The observatory is a collaboration between NASA, the European Space Agency and the Canadian Space Agency.

Yet not all scientists are excited about the project. Some researchers, especially those in fields such as planetary science and solar physics, fear that JWST's bulging budget will siphon off funds from their own disciplines. An editorial signed by 18 planetary scientists in the Sept. 8 issue of the Planetary Exploration Newsletter argued that JWST should not come at the expense of other NASA missions. [Q&A With John Mather, JWST Senior Project Scientist]

In reaction to some of this discontent, planetary scientist Jonathan Lunine of Cornell University, a member of the JWST Science Working Group, pointed out that James Webb will offer significant capabilities of interest to planetary scientists as well as astrophysicists, such as the ability to observe both planets in our own solar system and alien worlds around other stars. If some portion of JWST's funds must come out of NASA's planetary science budget, the investment would be worth it, he argued.

"Between 6 to10 percent of Hubble time is used by planetary scientists," Lunine said during the web conference. "One expects that a large amount of JWST time will go to planetary topics.

"This isn't just an astrophysics mission, this is a science mission," Mountain said.

The JWST team also stressed that many changes have been put in place over the last year, following an October 2010 independent review panel report that blamed budgeting and management failures for the project's significant cost growth and schedule delays.

"JWST is on a new path," said Rick Howard, program director of the JWST Program Office at NASA Headquarters in Washington. "All of JWST senior management at [NASA's Goddard Space Flight Center] and headquarters were replaced. This is really our last chance to do this right. Everyone understands that, so we have been very careful to put together a re-plan that we feel is robust."

Ultimately, whether or not NASA is able to follow through on the project will be hugely significant, the scientists said.

"JWST is seen by people as a litmus test for whether the U.S. really wants to remain a leader in space," Abraham said. "There's no doubt that JWST is a big challenge. But getting JWST done is seen by the international community as a pretty clear message that the U.S. is still capable of doing really great things."