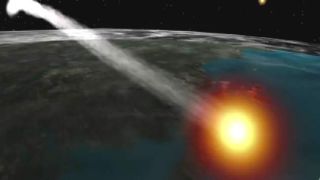 A NASA satellite the size of a school bus is just days away from taking a fiery plunge into Earth’s atmosphere and could set off a dazzling display when it does … if anyone is able to see it.

NASA's 6 ½-ton Upper Atmosphere Research Satellite is due to fall somewhere on Earth Friday (Sept. 23), though exactly where and when remains a mystery.

If you happened to be lucky enough to be within viewing range of a satellite that is re-entering the atmosphere, the sight, put simply, would amount to a short-lived but spectacular fireworks display. Unlike a fireball meteor, whose flight across the sky might take no more than a few seconds, a re-entering satellite’s path usually lasts much longer.

As the satellite descends to an altitude of about 50 miles (80 kilometers), friction with the atmosphere is converted to light and heat. As it moves on a relatively slow – one could almost use the adjective “majestic” – flight across the sky, what is usually seen is a long trail of light and sparks that can take on virtually every color of the rainbow. [Photos of NASA's Huge Falling Satellite UARS]

Small chunks of the satellite may be seen to break off and trail behind the main body. (NASA expects up to 26 pieces from UARS to survive re-entry and reach the ground.) If the re-entry occurs at night, it could light up the sky with a brilliance that easily rivals the full moon. Even if it occurs during the daytime, the satellite's fiery passage across the sky could be readily seen.

Notes veteran satellite watcher Kevin Fetter: "A nice sized [satellite] with a uncontrolled re-entry. What a nice light show it should put on, if the decay occurs where people can see it."

Danger of being hit?

According to NASA, since the beginning of the space age there have been no confirmed reports of an injury from re-entering space objects. In his 1983 book “Observing Earth Satellites” (Van Nostrand Reinhold Co.), author Desmond King-Hele put things into perspective:

“Far more dangerous are aircraft, of which at least a hundred per week fall out of the sky worldwide, as compared with about two satellites per week. With an expected casualty rate of about one person per hundred years, as compared with several hundred people per day on the world’s roads, space travel deserves to be called the safest form of transport for bystanders.” [Amateur Astronomer Photographs Doomed Satellite]

According to NASA, there is a 1-in-3,200 chance that debris from UARS could hit anyone anywhere in the world, but your personal chance of being struck by a piece of debris is on the order of 1-in-several trillion.

The satellite, which was deployed by the space shuttle Discovery in 1991, was decommissioned in December 2005. The $750 million UARS was the first multi-instrumented satellite to observe numerous chemical constituents of Earth's upper atmosphere.

NASA announced the impending uncontrolled re-entry of UARS on Sept. 7.In recent weeks, the satellite’s orbit has dropped to a level where atmospheric drag forces have been so great that UARS cannot remain in orbit. [Photos: Space Debris & Cleanup Concepts]

When and where will UARS fall?

As to when UARS is destined to come down, the best estimates right now seem to be focusing on an interval roughly 18 hours long, running from midday Friday to early Saturday.  Ted Molczan, the moderator of the SeeSat Internet mailing list, utilized six sets of orbital elements obtained from the U.S. Strategic Command to derive a possible window for re-entry.  His calculations suggest that UARS could re-enter anytime from Sept. 23 at 1432 GMT (10:32 a.m. EDT) to Sept. 24 at 0648 GMT (2:48 a.m. EDT).

Another SeeSat member, Harro Zimmer of Berlin, Germany, predicts Friday at 2004 GMT (4:04 p.m. EDT) plus or minus five hours, and descending on 19.1 degrees north, 128.5 degrees east  ?over the West Pacific near the northwest coast of Japan.

Interestingly, if UARS is somehow still in orbit Friday evening, it is predicted to make up to three southwest-to-northeast passes over parts of North America. [Related: How to Spot Satellites]

NASA says Tracking and Impact Prediction messages ("TIPs") will be prepared and released to the general public two days, one day, 12 hours, six hours and two hours ahead of the UARS re-entry. But even two hours before re-entry, the average time uncertainty amounts to 25 minutes for nearly circular orbits.

Keep in mind that only the track during the final revolution over the Earth can be forecast, and not the exact geographical location of the satellite's burn-up. Unpredictable tumbling of any space vehicle as it collides with the denser air can alter the drag forces acting upon it or produce an aerodynamic lift that can deflect it from its projected path.