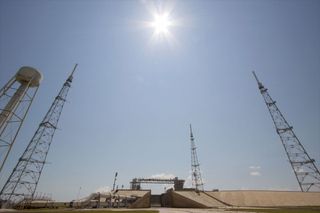 After more than two years of demolition work, the deconstruction of the historic space shuttle gantry towers at Kennedy Space Center’s Launch Pad 39B was declared complete on Sept. 15, 2011.
(Image: © NASA. See more photos and video at collectSPACE.com.)

The historic space shuttle gantries that for decades towered over Launch Pad 39B at NASA's Kennedy Space Center, Fla., are no more.

After more than two years of careful "deconstruction" work, demolition crews told NASA on Wednesday (Sept. 14) that the pad was "clean" of the fixed and rotating service structures that supported the launch of 53 shuttle missions. [Photo Gallery: Launch Pad 'Cleaned' of Historic Towers]

Started in 2009 in support of NASA's now-canceled Constellation program and its Ares rockets, work to clear the towers was focused on converting 39B to a "clean pad," capable of launching different types of crewed and uncrewed boosters. The pad may now be leased by NASA to companies providing commercial rockets to fly astronauts to the International Space Station. Or, together with its yet-to-be-cleaned twin pad 39A, 39B could be used to support NASA's recently revealed Space Launch System heavy-lift launch vehicle.

Future rockets launching from Pad 39B will arrive with their own mobile gantries, similar to how the pad got its start more than 40 years ago.

First used to launch the Apollo 10 mission on a Saturn V rocket in May 1969, Pad 39B was augmented for the space shuttle program with a 267-foot fixed service structure (FSS) assembled in part from one of the mobile launchers that supported the earlier moon-bound flights. [Lunar Legacy: 45 Apollo Moon Mission Photos]

A 130-foot-high-by-102-foot-long rotating service structure (RSS) was also erected to protect the shuttle orbiters from the elements and provide access to their cargo bays.

Together, 39B's FSS and RSS towers supported two decades of shuttle launches. The gantries' first shuttle launch was the ill-fated Jan. 28, 1986 STS-51L mission, which ended 73 seconds into flight with the tragic loss of Challenger and its crew. Fifty-two missions later, Discovery's STS-116 crew became the last to cross the FSS's orbiter access arm and launch on a shuttle from 39B on Dec. 9, 2006.

One more rocket lifted off Pad 39B before the towers were removed. NASA's Ares I-X unmanned test flight lifted off on Oct. 28, 2009, after new lightning protection towers were erected around the pad and two of the FSS's access arms had been detached, lowered and removed.

NASA paid $1.3 million to LVI Environmental Services of New York to remove the historic towers piece-by-piece to avoid damaging the concrete pad foundation. Per LVI's contract with the space agency, the gantries' scrap metal was recycled.

Visit collectSPACE.com for photographs and video of the deconstruction of Launch Pad 39B from start to finish.