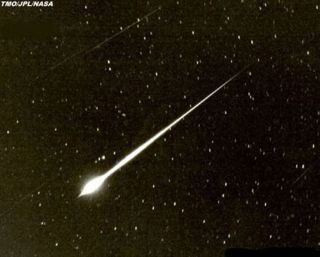 This photo illustration shows a fireball seen in 1966 by astronomer Jim Young of JPL's Table Mountain Observatory. A similar fireball sight is thought to have greeted skywatchers in the southwestern U.S. on Sept. 14, 2011.
(Image: © NASA/.JPL)

A bright, green-colored fireball that streaked across the night sky over the southwestern United States yesterday (Sept. 14) was most likely a meteor, according to NASA.

Surprised residents in Phoenix, Las Vegas and parts of Southern California described seeing an intense greenish light shoot from west to east across the sky around 7:45 p.m. PDT (10:45 p.m. EDT). No supernatural explanation for the spectacle is necessary, though.

"We're virtually certain this bright display was caused by a meteor, probably the size of a baseball or basketball, that burned up in Earth's atmosphere," Don Yeomans, manager of NASA's Near-Earth Object Program Office at the agency's Jet Propulsion Laboratory in Pasadena, Calif., said in a statement. "It appeared much larger because of the heated and glowing atmosphere along its path."

The brilliant fireball glowed with a blue green tint, according to eyewitnesses. This coloring is likely due to the space rock's chemical makeup — specifically the presence of nickel or magnesium in its composition, Yeomans said. [Fallen Stars: A Gallery of Famous Meteorites]

The streaker also appeared orange to some observers. Yeomans attributed this phenomenon to the fact that it was traveling relatively slowly for a meteor, around a few miles per second.

A fireball is essentially another term for a bright meteor, but when these objects are seen in space, astronomers refer to them as meteoroids. Only those that enter Earth's atmosphere to create glowing streaks across the sky are labeled meteors, and any fragments that reach ground are called meteorites.

"From the descriptions we've heard it sounds like a fireball created by a meteor," astronomers with NASA's Asteroid Watch program said today via Twitter.

And while the so-called "southwest fireball" created a spectacular sight for some lucky skywatchers, these types of events are not altogether uncommon.

According to the American Meteor Society, several thousand meteors of fireball magnitude travel through Earth's atmosphere every day, but many are undetected because they occur over oceans or desolate regions of the planet. Others are less visible because they happen during daylight hours.