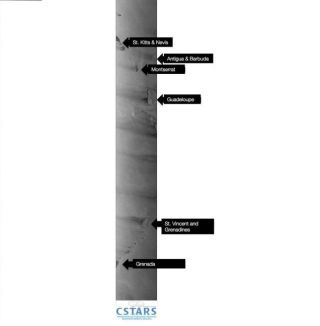 The Antilles Islands, as seen from the ERS-2 satellite.
(Image: © ESA/CSTARS.)

After 16 years orbiting Earth and taking pictures of its surface, a European Space Agency satellite took one last image this summer before it shut down for good.

The final image was taken by the ERS-2 satellite over the Antilles Islands in the Caribbean. ERS-2 was decommissioned and removed from its continuous orbit Earth July 4.

The data collected from the satellite represented a major asset for the Earth observation community, according to a European Space Agency statement.

CSTARS used the satellite to collect more than 24,000 scenes of environmental conditions on Earth. All together, these images represent 93 million square miles (240 million sq km), which would cover the United States more than 24 times.

The ERS-2 (successor to the ESA's original European Remote-Sensing Satellite) was launched in 1995 with a mission to observe land, ocean, atmosphere and polar regions using its variety of remote-sensing instruments. The first satellite images collected by CSTARS occurred in 2002.

The satellite gained significant recognition as a nimble collector of data, able to adapt quickly to what was going on in the world.

"The latest example was the recent earthquake in Japan, where repetitive observations were made over the Sendai area every three days," said Wolfgang Lengert, who managed the satellite's missions at ESA. [Japan Earthquake and Tsunami in Pictures]

Following the March 11 earthquake in Japan, the satellite's private communication lines transmitted the data to CSTARS in near-real time. The data were then rapidly processed to generate basic images of the conditions on the ground for researchers to analyze, such as vertical ground displacement near the earthquake epicenter in Sendai.