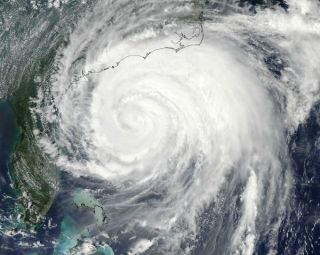 As the ISS approached the southern coast of Cuba this afternoon, astronaut Mike Fossum noted that already the cameras aboard the orbiting research station could see Irene on full display — the hurricane lay draped across the Earth's curved horizon like a dense milky galaxy. [See video of the flyover here.]

At the time the ISS streaked overhead, the center of the storm lay just off the South Carolina coast. The astronauts noted that parts of the hurricane were visible as far south as El Salvador.

Although the hurricane, has weakened to a Category 1 storm, it remains a powerful tempest. The storm is barreling up the eastern seaboard, with many major population centers in its cross hairs.

Tropical storm-force winds, which can reach 74 mph (120 kph), extend nearly 300 miles (482 kilometers) from the center of storm, which is forecast to hit North Carolina's coastline tonight.

Hurricane watches are in effect up and down the eastern seaboard, from New York City to Boston.

During yesterday's ISS flyover of Hurricane Irene, thick storm clouds still covered the Bahamas. The idyllic islands got a lashing from the storm, but today astronaut Mike Fossum noted that the islands appeared to be peaceful again.

"From 240 miles it looks beautiful down there," Fossum said, "but I know they have a lot of cleaning up to do, and a lot of carnage left behind."

This story was provided by OurAmazingPlanet, sister site to LiveScience.com. Reach Andrea Mustain at amustain@techmedianetwork.com. Follow her on Twitter @AndreaMustain.