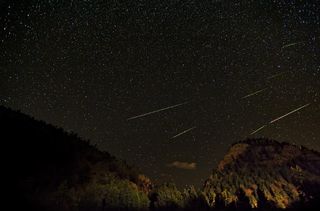 This year's Perseid meteor shower peaks on the night of Friday, Aug. 12 and into the early morning of Saturday, Aug 13.
(Image: © Michael Menefee)

In a double weekend treat, one of the most well-known and reliable meteor showers — the Perseid meteor shower — will reach its peak overnight Friday (Aug. 12) as the International Space Station flies across the sky above many U.S. cities.

The annual Perseid meteor shower returns this week, but is expected to hit its peak activity in the overnight hours of Friday and Saturday (Aug. 13). While the full moon of August may interfere with the meteor display, the best time to catch the pretty light show (weather permitting) is during the predawn hours, especially on Saturday morning, experts at NASA advise.

And if you're looking skyward before dawn this week, you might also be able to glimpse the space station overhead. [Photos: Amazing Perseid Meteor Shower Displays]

The International Space Station will be making a series of early morning flybys over the U.S. throughout this week and into the weekend, NASA officials said. The massive orbiting complex shines bright enough that its visibility in the sky is not drowned out by moonlight or city lights.

NASA's space station tracker lists local flyby times, including those for several major cities such as Chicago, Dallas, Los Angeles and New York, that are expected to have good viewing opportunities on Friday and Saturday.

NASA is inviting the public to participate in a Perseids webchat and "all-night" meteor shower viewing party, hosted by astronomer Bill Cooke and his team from NASA's Marshall Space Flight Center in Huntsville, Ala. The webchat will begin at 11:00 p.m. EDT (0300 GMT) on Friday (Aug. 12) and will last until 5:00 a.m. EDT (0900 GMT) on Saturday (Aug. 13).

The Perseid meteor shower occurs every year as Earth passes through a stream of dust particles and debris from the Comet Swift-Tuttle. As these specks of comet dust hit the top of Earth's atmosphere at speeds of up to 140,000 miles per hour (225,000 kilometers per hour), they are heated and form bright meteor streaks that can be seen across the sky.

These meteors stream out of the constellation of Perseus, which is how the meteor shower got the name "Perseids." [Top 10 Perseid Meteor Shower Facts]

Skywatchers around the world are currently counting more than a dozen Perseids each hour, according to NASA and the International Meteor Organization. The light show should reach its peak between Aug. 12 and 13, as Earth orbits near the heart of the comet debris stream.

This year, however, the full moon occurs one hour after the peak of the Perseid meteor shower, which could outshine some of the fainter Perseids that would normally be visible against a darker sky, according to NASA. But before dawn, the full moon will be relatively low and the meteor count should be high at that time. [Video: Perseid Meteor Shower 2011 Guide]

The meteor shower will likely be viewed best under dark country skies, which will help eliminate light pollution.

Gaherty also reminds meteor watchers to have patience, as the streaks usually come in bunches, with wait times in between. He recommends budgeting at least an hour or two of skywatching to catch a good glimpse of this year's shower.

Editor's note: If you snap an amazing photo of a Perseid meteor this year and would like to share it with SPACE.com for a possible story or gallery, please contact managing editor Tariq Malik at: tmalik@space.com.