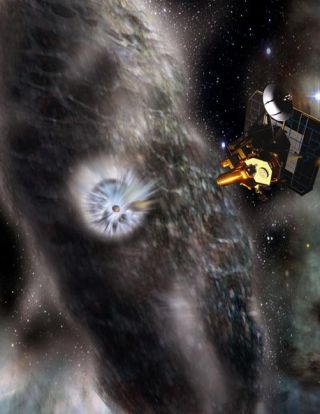 Deep Impact gave scientists their first close-up look at the interior of a comet when it hit. Here, an artist illustrates the encounter.
(Image: © Ball Aerospace.)

Like some Space Ageequivalent of WrestleMania, NASA's Deep Impact spacecraft isdouble-billed to tangle with Comet Tempel 1 on July 4. The mission is a two-part project:A "Flyby" vehicle will unleash an "Impactor" probethat will slam into the fast-moving comet.

The comet and Impactor will collide at about 23,000 mph.

Deep Impact is the firstmission to make contact with a comet's surface. The hope is to produce a craterin the large comet and reveal what is underneath the surface.

The event could be visible frombackyards. But for some, the novel space shot conjures visions of comet chunkscareening into Earth. Is there any chance that Deep Impact will result in icylumps of the comet splitting off, placing our planet in danger?

Put your crash helmets backin the closest and get some sleep.

Ball Aerospace, inassociation with the University of Maryland and NASA'sJet Propulsion Laboratory (JPL), developed and integrated the Flyby spacecraft,the Impactor spacecraft, and science instruments,including three telescopes, three cameras and a spectrometer for analyzing theinterior of the comet - as revealed by the high-speed run-in.

Comet Tempel 1 is moving at a brisk 66,000 milesper hour. The ejected Impactor is slated to be speedingat roughly 43,000 miles per hour. Deep Impact won't have a head-on crashwith the comet, like the old anti-ballistic missile defense adage of"hitting a bullet with a bullet".

"We're being overrunfrom behind," Hendersontold SPACE.com. "The speeds are just mind-boggling."

Telescopes onboard theFlyby vehicle will be trained on the Impactor as itis overtaken by the comet. The intent is to see crater formation as it'soccurring, Hendersonsaid. Scientists expect to see a crater shaped that's a 100 yards long, andbetween seven to twelve stories deep, "with nice vertical walls," he said.

In the event that the Impactor isn't successfully ejected by the Flybyspacecraft, then the entire vehicle is on a true comet kamikaze mission. It isto pile-drive itself into the comet, Hendersonsaid. "It's important to the science community that we create a crater."

Simulation of a natural event

The excavation of the comet by DeepImpact may create a cloud of meteoroids, objects larger than the gas and dustthat NASA predicts. And that possibility might not be so unnatural, contendsPeter Jenniskens, an astronomer with the SETIInstitute in Mountain View, California.

In a paper accepted for publicationin the September issue of the Astronomical Journal, Jenniskensand co-author Esko Lyytinen,an amateur astronomer and meter shower expert from Finland, report that as a result ofTempel 1 breaking, a meteoroid stream will be created"in much the same manner as the mechanism that causes most of our meteorshowers."

There are several possible causes ofsuch fragmentations. But the idea that collisions between comets and largemeteoroids spark such fragmentation is on the table, Jenniskenssaid. Furthermore, the Deep Impact mission acts as a simulation of such anatural event.

"Depending on how thekinetic energy of the impact will be distributed, there is a real possibilitythat sufficient internal gas pressure builds up to break the comet apart. Atthat time, we can study the peculiarities of dust generation in the way thatled to our main meteor showers," Jenniskens and Lyytinen conclude. They also predict that the dustproduction will be moderate.

There is a "way outsidechance" that Deep Impact will promote an explosive release of built-up,sub-surface gas pressure, said Donald Yeomans,Supervisor of the Solar System Dynamics Group at the Jet Propulsion Laboratory(JPL) in Pasadena, California.

Yeomans said in the event that anymeteoroid material is released, it will be modest and come no where near theEarth. (Meteor showers on Earth develop when Earth passes through a streamof comet debris.)

"So a modest meteoroidstream might be created that would follow the parent comet but no visiblemeteors would result of course," Yeomans said."Perhaps an enhanced meteoroid stream following the comet might be discernablein pre- and post-impact infrared images. It would be unlikely, but not outof the question," he explained.

But given that the Impactor and Tempel 1 will banginto each other at a force of four-and-a-half tons of TNT, why wouldn't thatexplosive energy toss out huge bits of comet...splinters that could head towardEarth?

"The bottom line is that wehave an object the size of a washing machine colliding with a comet the size ofManhattan Island. No contest," Yeomanssaid.

If Comet Tempel 1 happened to be smaller, say roughly 500 feet (150meters) across as opposed to its true average diameter of 4 miles (6 kilometers),the Deep Impact crash would be sufficient to adjust the comet's course by anamount equal to Earth's radius ten years after the spacecraft impact, Yeomans told SPACE.com.

Yeomans and his colleagues have done somecalculations, just to help put worries about the risk to Earth to rest. Theyassumed a 98-foot (30-meter) chunk was broken off as a result of the impact.That size was selected as the smallest chunk that might cause some grounddamage at Earth.

But for that chunk to bepropelled into a new Earth-crossing trajectory, Deep Impact would need toimpart a wallop that must be, well, simply astronomical. Furthermore, for thesame impact velocity as Deep Impact, the impacting spacecraft mass would thenhave to about 5,900 times the mass of the actual Impactor.

"On a number of levels, itwould be impossible for Deep Impact to deliver a comet chunk to Earth," Yeomans concluded.

While the primary sciencegoals for Deep Impact do not include a demonstration of possible mitigationtechniques, Yeomans said that the rathersophisticated autonomous navigation process used to impact the comet would besimilar to those necessary to mitigate a threatening near-Earth object in theyears to come.

Comets: devilishlydifficult to pin down

But while Deep Impact is animpressive science mission, it won't be all that helpful in learning how tofend off troublemaking asteroids.

That's the view of formerNASA Apollo astronaut Russell Schweickart. He ischairman of the B612 Foundation, a group of experts dedicated to significantlyalter the orbit of an asteroid in a controlled manner by 2015.

"It will not tell us very much aboutthe issue of asteroid deflection," Schweickart said,"even though kinetic impact is a possible option for a small sub-set ofasteroids that we might need to deflect."  For one, the surface structuralcharacteristics are quite likely very different given the high water componentof comets, he added.

"The relative velocity in the DeepImpact case is considerably higher than we would be able to achieve with mostasteroids," Schweickart noted. "And finally, thechange in the comet's trajectory will be so small that measurement andattribution will be very challenging."

Comets are "devilishly difficult topin down accurately due to their outgassing," Schweickart suggested. After the impact it will bedifficult -- if not impossible -- to separate the effects of the impact itselffrom any changes brought about by post-impact outgassing- expected to rise dramatically due to the impact, he said.

"Still, it is an interestingexperiment to watch. The cratering process, the ejecta pattern and other observations will surely give ussome clues," Schweickart observed. Those involvedwith Deep Impact "are clever folk and there are doubtless some lessons to belearned."

Balance of the solarsystem

The Deep Impact mission isdesigned to alter the comet so that scientists can see beneath the surface,said Lucy McFadden, a member of Deep Impact's science team. She is an AssociateResearch Scientist for the Universityof Maryland's Astronomy Department in College Park, Maryland.

As for altering the comet's path,"the answer is no, not measurably," McFadden told SPACE.com. "This eventis happening in space, and space is huge, even when we are operating within oursolar system."

McFadden notes that objects movingin space are not like billiard balls on a pool table.

"We won't knock the comet off itsorbit and into a collision course with Earth. The comet has tremendous orbital energythat is orders of magnitude greater than that of the spacecraft," McFaddenexplained.

The experiment mimics impacts in theSolar System that have occurred since its formation, McFadden added. "It willnot upset the balance of the solar system."