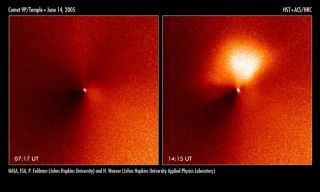 A before-and-after view of Deep Impact's target comet Tempel 1 shows the sudden creation of a dust jet. The images were taken by the Hubble Space Telescope during a rehearsal for observations on impact day.
(Image: © NASA/ESA/P. Feldman/H. Weaver)

A comet that will be whacked by a NASA probe next week almost looks like its having some pre-impact jitters, flaring up in a new picture taken by the Hubble Space Telescope.

The image shows a plume of gas and dust shooting out from comet Tempel 1. The plume does not appear in another photo taken a few hours earlier.

The outburst is normal for a comet, said Paul Feldman, a Johns Hopkins University astronomer who led the observations. It likely originates from a crack in the comet's crusty shell, which releases volatile material from below.

It's just that sort of outburst that astronomers hope to generate, on a larger scale, when the Deep Impact spacecraft's washing machine-sized projectile hits Tempel 1 early in the morning on July 4 (late at night on July 3 in the western United States).

The Hubble observations show that Tempel 1, as with many comets, is capable of releasing jets of material from its somewhat fragile nucleus. In this natural case, solar energy heats the comet, Feldman explained in a telephone interview. The heat penetrates the surface, and volatile material inside forces its way through the shell.

Scientists don't know exactly what comets are made of or how firm or fragile they are. Deep Impact's fireworks should shed light on those questions as the crash is observed by the mothership and several telescopes around the world and in space. The fact that Tempel 1 is ejecting material on its own is a good sign that Deep Impact will indeed kick up a useful cloud of material. Scientists figure the projectile will make a crater perhaps as big as a football field.

"It means something can trigger material to come off of it," Feldman said. "That makes me feel very optimistic."

NASA has billed the event as one that can be seen from backyards on Earth. The comet may temporarily brighten enough to be just barely visible to the naked eye, astronomers have said.

Based on what he knows of Tempel 1, however, Feldman is not optimistic that the comet will brighten enough to be seen without optical aids. "I wouldn't bet on it," he told SPACE.com.

And given the comet's characteristics seen so far, even making it visible through binoculars will require that Deep Impact hit a sweet spot. Thing is, nobody knows where that sweet spot might be or whether the comet is more vulnerable in one location than another.

"In the most optimistic case, someone with a pair of binoculars might be able to see it," Feldman said.

Expert skywatchers point out that spotting any marginally visible comet can be a challenging task that requires some practice or good advice, the right equipment, and a good sky map.

The Hubble images were taken June 14 and released today. They have been enhanced to better showcase the plume. The less interesting of the two images was taken at 2:17 a.m. ET. The plume shows up seven hours later in the second image. Later the plume was not visible.

Feldman said comets regularly emit material in this manner as they move closer to the Sun on their orbital paths. Tempel 1 is just about as close to the Sun as it will get and is not expected to become any more active than it is now, aside from the potential display on July 3-4.

The plume points toward the Sun, rather than away from the Sun as do comet tails. Here's why: The side of the comet facing the Sun gets heated, so that's where cracks appear, and the material bursts toward the Sun.

Comet tails develop over time, as gas and dust from many such outbursts accumulates around a comet to form a dense head, or coma. If a comet is close enough to the Sun, pressure from solar radiation then pushes some of that debris backward, forming a tail that always points away from the Sun.

Tempel 1 currently has no noticeable tail.

The comet's core, made of rock, water ice and other chemicals, is potato-shaped and about half the size of Manhattan.

Readers might wonder if Deep Impact has any chance of breaking apart comet Tempel 1.

Sometimes comets crack up on their own as they near the Sun. That happened in 2000 when comet 1999 S4 LINEAR disintegrated while astronomers were watching. But LINEAR was a new comet, Feldman notes, making its first pass near the Sun. Tempel 1 on the other hand, has been here before with little fanfare, so scientists do not expect even the antics of Deep Impact to tear it apart.