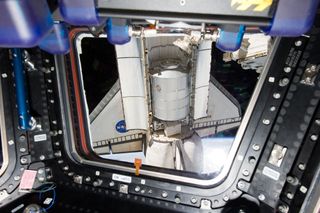 NASA has cleared the space shuttle Atlantis to return to Earth tomorrow in a historic final shuttle landing.

Mission managers reviewed data from a last inspection of Atlantis' heat shield performed Tuesday (July 19), and found that the orbiter's sensitive thermal protection tiles are in good shape to withstand re-entry to Earth.

Current forecasts at the Florida landing site show that weather appears to be cooperating. Despite some early showers that are expected to dry out by landing time, forecasts are showing good visibility and low winds, said Tony Ceccacci, Atlantis' entry flight director.

"Weather is looking very promising tomorrow morning," Ceccacci told reporters in a news briefing today (July 20). "Of course everyone was talking about Tropical Storm Bret, but that's moved northeast, and not going to pose any problem for KSC landing weather."

NASA flight rules do not allow space shuttles to land in the rain because of a number of risks, including potential damage to the orbiter's heat shield tiles. Low cloud ceilings also pose a problem because they obscure runway visibility for the shuttle's commander and pilot.

The agency has two landing windows in Florida tomorrow, and up-to-date forecasts are predicting fair weather for both tries. After the first predawn opportunity, the second window opens up for a landing at 7:32 a.m. EDT (1132 GMT).

Kennedy Space Center's Shuttle Landing Facility acts as the primary landing site, but NASA also has access to a backup runway at Edwards Air Force Base in California.

If Atlantis is unable to land on Thursday, flight controllers will assess weather at both landing sites on Friday and then make a decision about where the shuttle should touch down, Ceccaci said.

Earlier today, the astronaut crew performed a battery of tests to ensure that all of the spacecraft's systems are ready for landing. The shuttle also deployed its last payload, a tiny satellite called PicoSat for the U.S. Department of Defense, from a spring ejection canister.

"We call it the jack-in-the-box," Ceccacci said.

The mini satellite has its own maneuvering ability and will perform tracking experiments during its three to nine months in orbit. PicoSat also has an onboard digital camera that will be used to snap pictures of Atlantis, making them the final photos of a space shuttle ever taken from space.

Ceccacci said his first priority is getting the orbiter and crew safely back on the ground, but he did reflect on the significance of the task, and read a prepared statement to reporters about the end of the shuttle era.

"As they say, all good things must come to an end," Ceccacci read. "For me, it's been an unbelievable journey on a magnificent flying machine. I'm very proud to have been a part of the shuttle team. My congratulations and thanks go to all the thousands of dedicated and passionate team members. Because of their blood, sweat and tears, we can say 'mission complete.' It's time to celebrate this amazing accomplishment and look forward to the future. Godspeed to all."

Once Atlantis' wheels roll to a stop, Ceccacci plans to make some closing remarks to his team in Mission Control at the Johnson Space Center in Houston. He then hopes to mark the historical moment by gathering the entire team in the flight control room so they can "soak it in and watch the crew walk around and congratulate each other on a job well done."

And despite the uncertainty swirling around the end of the space shuttle program, Ceccacci said he has high hopes for the future.

"My hope is that this is not the end," he said. "Everyone keeps asking the crew that question. We know there's going to be a rough spot for a while, but we hope that when we get a good plan, a good direction, we can come back in here and do what we've been doing for the past 30 years with the shuttle, and the years before that with Mercury, Gemini and Apollo."

You can follow SPACE.com Staff Writer Denise Chow on Twitter @denisechow. SPACE.com Senior Writer @ClaraMoskowitz contributed to this report. Visit SPACE.com for complete coverage of Atlantis' final mission STS-135 or follow us @Spacedotcom and on Facebook.