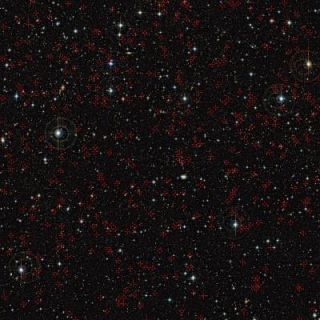 This very deep image shows the COSMOS field imaged by the Canada France Hawaii Telescope (CFHT). Huge numbers of very faint galaxies are visible. A new study of this field, combining data from ESO's Very Large Telescope and ESA's XMM-Newton X-ray space observatory has turned up a big surprise. Most of the huge black holes in the centres of active galaxies in the past 11 billion years were not turned on by mergers between galaxies, as had been previously thought. Some of the active galaxies with supermassive black holes at their centers that were used in the new study are marked with red crosses on this picture.
(Image: © CFHT/IAP/Terapix/CNRS/ESO)

A collision between galaxies was thought to create a feast of matter to be eaten by the huge black holes lurking in their centers. But new research indicates such galaxy crashes aren't responsible for the outbursts caused by gorging black holes.

Instead, mysterious forces within the galaxies might be to blame.

At the heart of virtually all large galaxies are supermassive black holes million to billions of times the mass of the sun. In many galaxies, including our Milky Way, the central black hole is quiet, but in others known as active galaxies, matter at the nucleus of the galaxy gives off intense radiation as it gets sucked into the core black hole.

Scientists had thought most active galactic nuclei were triggered by two galaxies merging or passing close to each other. Such titanic disturbances could drive material from a galaxy's disk toward its core. But now researchers find these monumental disruptions are often not to blame for activating the black holes.

An international team of scientists working on the COSMOS (Cosmological Evolution Survey) experiment investigated more than 600 active galaxies using the European Space Agency's XMM-Newton space observatory and the European Southern Observatory's Very Large Telescope in Chile. Their observations allowed them to make a three-dimensional map showing the locations of the active galaxies. Because light takes time to travel, knowing the distance of these galaxies from Earth also helped reveal their ages. [Gallery: Black Holes of the Universe]

"It took more than five years, but we were able to provide one of the largest and most complete inventories of active galaxies in the X-ray sky," said researcher Marcella Brusa at the Max Planck Institute for Extraterrestrial Physics at Garching, Germany.

If active nuclei were the consequences of colliding galaxies, as had been expected, scientists would have found them in galaxies with only moderate masses — those about a trillion times the mass of the sun. Instead, the researchers found that most active nuclei reside in galaxies with masses about 20 times larger than the collision theory had predicted — galaxies that contain lots of the invisible, as-yet-unidentified dark matter that makes up about 85 percent of all matter in the universe.

Even in the distant past, up to almost 11 billion years ago, when the universe was only about 2.7 billion years old, "galaxy collisions can only account for a small percentage of the moderately bright active galaxies," said researcher Alexis Finoguenov at the Max Planck Institute for Extraterrestrial Physics. "At that time galaxies were closer together so mergers were expected to be more frequent than in the more recent past, so the new results are all the more surprising."

"These new results give us a new insight into how supermassive black holes start their meals," said researcher Viola Allevato at the Max Planck Institute for Plasma Physics at Garching, Germany. "They indicate that black holes are usually fed by processes within the galaxy itself."

For instance, molecular clouds in a massive galaxy's disk might get driven into its central black hole by perturbations in the disk, Finoguenov told SPACE.com.

The scientists will detail their findings in the Astrophysical Journal this month.