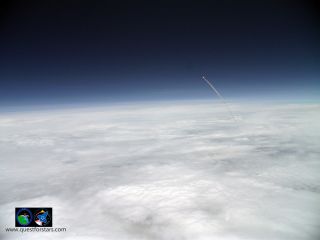 The StratoShuttle-1 student balloon, an educational project by the Quest for Stars group, captured NASA's shuttle Altantis soaring into orbit as seen from 89,000 feet on July 8, 2011. Tweeted @questforstars: "Atlantis, GO at Throttle up!"
(Image: © Quest for Stars)

The final space shuttle launch made a spectacular arc across the sky in photos taken from the edge of space by a student balloon project.

From an altitude of more than 89,000 feet (27,000 meters), the balloon took photos of NASA's shuttle Atlantis making the final liftoff of the space shuttle program. Atlantis blasted off on Friday (July 8) from NASA's Kennedy Space Center in Florida.

"Student involvement was quite heavy," Quest for Stars' founder Bobby Russell told SPACE.com. "They designed the payload system that we flew. They not only deigned and built it with their own hands, they ran the mission control center for it too."

StratoShuttle-1 launched from the Seminole Softball Complex in Orlando, Fla., and landed in Altoona, Fla., about 45 miles away, almost three hours later.

Quest for Stars was invited by NASA to run their mission out of the Center for Space Education at the Kennedy Space Center Visitor's Center.

"The kids loved that," Russell said. "It was an incredible experience. It was their first shuttle launch and they were part of it."

Both graduated this year, and are heading to college to pursue aerospace degrees, Russell said.

"Even though they're going off to college, they're still participating in the design," Russell said. "This is about the students.

Quest for Stars also launched student balloons to take photos of NASA's last two shuttle blastoffs. The balloon Robonaut-1 photographed NASA's final launch of the shuttle Discovery in February, with the Senatobia-1 balloon catching views of the last liftoff of Endeavour in May.

The group's latest project captured Atlantis streaking across the indigo-blue sky. The bright orange of the spaceship's engines glows as a far-away dot, with a graceful smoke contrail arcing below it.

But the mission was not without mishap.

"We had a thunderstorm develop over our launch site, and a lot of water got on our equipment," Russell said. "We lost a video transmitter because it got hit by water."

The team also had a scare when a storm blew their experiment into NASA's no-fly zone, a 40-mile radius circle around the space shuttle launch pad that vehicles are not allowed enter.

Though Russell and the students were "extremely concerned" that NASA might be forced to shoot down their balloon for safety reasons, they were reassured when they saw that StratoShuttle-1 was still in the air.

"I think they saw it as not a threat," Russell said.

In addition to capturing great views, the mission measured atmospheric conditions in preparation for a remotely controlled airplane flight Quest for Stars aims to launch later this summer.

The StratoShuttle-1 students weren't the only ones who caught a great view of Atlantis' launch.

High school student Ryan Graff was flying on a Southwest Airlines jet from Baltimore to Miami when he saw the shuttle lift off, Huffington Post reported. Graff grabbed his iPhone and snapped a picture of the zigzagging smoke trail underneath the shuttle.

Ryan's brother, Chad Graff, posted the photo on Twitter; the picture has now been viewed more than 91,000 times, according to Chad.

Visit SPACE.com for complete coverage of Atlantis' final mission STS-135 or follow us @Spacedotcom and on Facebook.