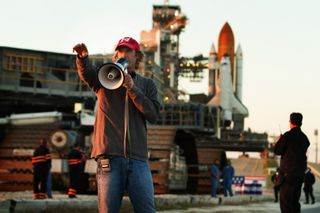 Michael Bay works at Launch Pad 39A with space shuttle Discovery in the background during filming of "Transformers: Dark of the Moon" while the production team was at NASA's Kennedy Space Center in October 2010.
(Image: © Paramount Pictures)

The latest installment of the live-action "Transformers" film franchise may be packed with Hollywood action and special effects, but sometimes all that high-tech fakery doesn't hold a candle to the real thing. That’s why the film's creators turned to NASA for help.

The new science fiction film "Transformers: Dark of the Moon," which opened Wednesday (June 29), creates an alternate version ofNASA's Apollo 11 moon landing in 1969 (in which Neil Armstrong and Buzz Aldrin find a robot alien spaceship) as a major plot point, then puts the agency's space shuttle Discovery — and some employees — in the spotlight.

"The idea of the space program always was how to get in contact with others, so we've brought the Transformers to the shuttle," said Lorenzo di Bonaventura, one of the film's producers. "The Kennedy Space Center has always been this sort of mythical thing, I think, for me. You imagine it out there and then you come here and you realize how many people are working here and what this kind of endeavor entails."

"Transformers: Dark of the Moon" is the third film in the "Transformers" franchise about huge intelligent robots that transform into cars, planes and other vehicles to disguise themselves on Earth. The films are based on the 1980s cartoon series and toy line of the same name.

Some NASA employees remembered watching the "Transformers" cartoon and playing with the toys when they were younger.

"Being that kid watching the cartoon back in the 80s and being part of it now is just an awesome experience," said Danny Zeno, a NASA test director who appears in the film.

"It's kind of hard to believe that you're standing in front of the shuttle over here," said John Turturro, who portrays the character Agent Simmons. "When you see something for real you kind of have to keep looking at it, walk around."

The "Transformers" filming at the Kennedy Space Center included scenes at the Launch Pad 39A, where Discovery was being prepared for its final mission, as well as NASA's cavernous Vehicle Assembly Building, and a space shuttle hangar known as an Orbiter Processing Facility. Scenes were also shot at the Space Station Processing Facility, where components for the International Space Station were being prepared to fly on shuttles, NASA officials said.

"It was kind of [in] homage to the space program," said NASA test director Bill Heidtman in a statement.

Those touches of real-life space exploration helped give the new "Transformers" film an extra flavor, according to film's creators.

"The highest grossing films of all time are science fiction movies and things that are in space. I think it's something we still have to discover," Bay said.

The NASA employees who appeared in the film were able to see a sneak preview on Tuesday (June 28) at the nearby Kennedy Space Center Visitor's Complex, which has an IMAX Theater.

"I thought they did a great job," said Mike Cianelli, another NASA test director who appears in the movie. "It was fun to see the production and then to see the end product."