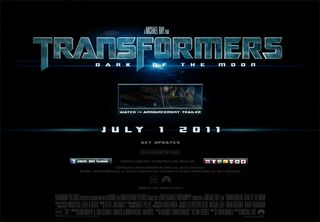 Screenshot of the Transformers: Dark of the Moon website.
(Image: © Paramount Pictures)

Houston, wehave alien robots. NASA's historic first manned moon landing of 1969has beengiven a new twist in the teaser trailer for the science fiction film"Transformers:The Dark of the Moon."

In the filmtrailer, which was released this week, director Michael Bay recreatesthe lunarlanding by Apollo 11 astronauts Neil Armstrong and BuzzAldrin  ? just likethey did on July 20, 1969.

But afterthey land, things get strange. During a supposed period of radiosilence, theApollo 11 astronauts bunny hop away from the Eagle lunar lander andclimb overa nearby hill to visit ... wait for it ? an alien spaceship thatcrashed intothe moon.

"We'renot alone after all, are we?" one of the astronauts asks in thetrailer. [Video:"Transformers: Dark of the Moon" trailer at Newsarama]

The linkbetween the new Transformersfilm and NASA is a strong one.

In October,Bay filmed part of the action movie ? which is the third and reportedlyfinalinstallment in the live-action "Transformers" series ? at NASA'sKennedy Space Center in Florida. His visit coincided with the presenceofNASA's space shuttle Discovery atop its seaside launch pad, thoughspace agencyofficials were unable to confirm if the shuttle was actually filmed inanyscenes.

The?Transformers?films are based on the 1980s cartoon series of the same name thatfeatured ateam of good robots, the Autobots, in a war against evil robots, theDecepticons. Earth serves as their battleground.

Bay hasrevealed in some media interviews that the third Transformersfilm will look back at the race to the moon between theUnited States andformer Soviet Union in the 1960s. He hinted that the trilogy's warringextraterrestrial robots will turn out to have played a significantbehind-the-scenes role in mankind's entering the finalfrontier.