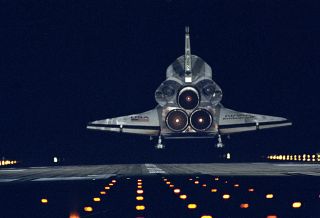 The space shuttle Endeavour glides back to Earth on Jan. 20, 1996, after nine days in space on the STS-72 mission. The orbiter is about to touch down on Runway 15 at the Shuttle Landing Facility at NASA's Kennedy Space Center in Cape Canaveral, Fla.
(Image: © NASA)

HOUSTON — As NASA winds down its space shuttle program, the agency is navigating a tricky transition that will not only ground the orbiter fleet for good, but will also mark a huge shift for the thousands of shuttle workers who have spent decades working in the iconic program.

After flying one final shuttle mission — which begins with the July 8 launch of shuttle Atlantis — NASA will officially retire its three-orbiter fleet, instead relying on international partners and private spaceship builders to ferry supplies and crews to the International Space Station. The agency is shifting its focus to exploration missions that push deeper into space, such as to an asteroid or Mars.

But for many shuttle workers, the very last flight of the 30-year shuttle program will truly be the beginning of the end. NASA expects to undergo a big round of layoffs that will significantly reduce the shuttle workforce, which currently stands at about 6,700 people, said John Shannon, NASA's shuttle program officer.

"It's tough to break up a team that has performed so well for so long," Shannon said today (June 30) in a preflight news briefing at the Johnson Space Center in Houston. "Right now we're down to those required just for sustained engineering and operations." [Retro Space Photos: Building Shuttle Atlantis]

Atlantis and its four-astronaut crew are slated to launch on July 8 at 11:26 a.m. EDT (1526 GMT). The shuttle will fly a 12-day mission to the International Space Station to deliver crucial supplies to the orbiting outpost.

Currently there are about 5,500 contracted employees spread across Texas, Utah, Louisiana and Alabama, and just less than 1,200 civil servants working on the shuttle, Shannon said. If Atlantis launches on time on July 8, the agency will lay off about 3,200 contractors on July 22, officials said.

Cutbacks for all of NASA's prime contractors will continue through the middle of August, leaving less than 1,000 people to manage the process of conditioning and preparing the vehicles for their future homes on display at museums around the country, Shannon said.

For flight directors, who oversee the various ground teams in Mission Control, the end of the shuttle program carries significant consequences. According to Kwatsi Alibaruho, Atlantis' lead space shuttle flight director, some members of his team will migrate over and provide support to the space station program, while others will likely seek different occupations altogether.

"There are individuals who at this hour do not have specific plans or job prospects after wheels-stop on STS-135," Alibaruho said. "There's a mix of successes and a mix of works in progress with respect to the disposition of personnel."

Yet despite knowing that the end is near, the workers have remained motivated to round out the program on a high note, Shannon said.

"I see a huge amount of determination to make sure this flight goes extremely well," Shannon said. "There's a lot of pride. The team is aware that they're carrying on their shoulders the responsibility for 30 years of legacy."

And poised to fill the gap created by the retiring shuttles are commercial firms such as SpaceX and Orbital Sciences, who hope to bring cargo, and one day astronauts, to the space station.

"The shuttle has been an amazing learning tool," Shannon said. "Now I think it's appropriate that we're handing that over to commercial companies to capitalize on experiences that we learned. We're leaving behind [low-Earth orbit] in good hands. We'll go on to the next thing that is difficult to do. I think folks understand that with the limited funding, you can't carry everything with you to do that next thing. Yes, it's sad to give up what you know, but [low-Earth orbit] is in good hands."