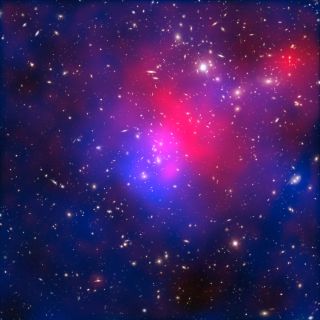 This week saw the release of some amazing views from space, including a vast nebula around a long-dead star, an oddball cluster of galaxies and a stunning view of a Saturn moon. Take a look at some of the best photos from space for the week ending today (June 25):

NASA's Dawn spacecraft obtained this image on its approach to the protoplanet Vesta, the second-most massive object in the main asteroid belt. The image was obtained on June 20, 2011.Credit: NASA/Dawn Mission

The Rosetta spacecraft's first images of its target, comet Churyumov-Gerasimenko. Left: The comet is hidden within this sector of space, a crowded star field in the constellation Scorpius. Middle: A closer look, still showing many background stars. Right: The comet becomes visible after various steps of data processing. Credit: ESA

The Solar Dynamics Observatory captured this video of the C7-class solar flare of June 20-21, 2011 in extreme ultraviolet wavelength. Credit: NASA/SDO.

This picture of the dramatic nebula around the bright red supergiant star Betelgeuse was created from images taken with the VISIR infrared camera on ESO’s Very Large Telescope (VLT). This structure, resembling flames emanating from the star, forms because the behemoth is shedding its material into space. Credit: ESO/P. Kervella

The four astronauts on shuttle Atlantis' final mission, the STS-135 flight, conducted a dress rehearsal for their July liftoff on June 23.The actual launch is set for July 8 and will be NASA's last-ever shuttle flight. Credit: collectSPACE/Robert Z. Pearlman

New Zealand sunset colored by the ash and other particles drifting around the Southern Hemisphere skies from the eruption of Chile's Puyehue-Cordon Caulle volcano. Credit: Kevin Thomson/http://www.flickr.com/photos/southspeed/

A sunset over Christchurch, New Zealand, on June 14 colored by the ash from the volcano. Credit: Geoff Trotter/http://www.flickr.com/photos/geofftrotter/