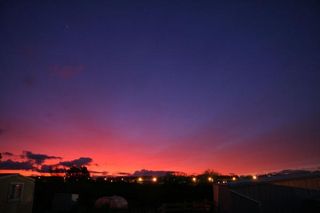 New Zealand sunset colored by the ash and other particles drifting around the Southern Hemisphere skies from the eruption of Chile's Puyehue-Cordon Caulle volcano.
(Image: © Kevin Thomson/http://www.flickr.com/photos/southspeed/)

After lying dormant for decades, Chile's Puyehue-Cordon Caulle volcano suddenly erupted on June 4 and has since hurled a tremendous cloud of ash, as well as plumes of sulfur dioxide into the air. This material has been circling the Southern Hemisphere and has been seriously disrupting air traffic for most of South America, and as far away as Australia and New Zealand.

But along with these negative aspects, the volcano has also been responsible for producing very colorful displays of deep reds and purplish hues as well as ripples of white both at dawn and dusk for many localities south of the equator.

This phenomenon of volcanic material coloring the twilight sky is well known and has been observed many times before in the aftermath of major eruptions. But just why does this occur? Before getting into an explanation, we should first explain how light is scattered to produce the various colors we see in our daytime sky. [See photos of the ash-colored sunsets.]

Why is the sky blue? That question was a befuddling one for a very long time. Around 1500, Leonardo da Vinci noticed that when white light passed through a cloud of smoke it appeared to have a bluish hue, but didn't make any connection with the color of the daytime sky.

Isaac Newton thought the color was due to the reflection of sunlight off of hollow water droplets, but this was wrong since hollow water droplets or bubbles do not occur in Earth's atmosphere. Then, in 1847, a German researcher, Ernst von Brücke performed a simple experiment with light passing through a cloud of smoke and observed that the light took on a bluish color similar to what da Vinci saw, and realized that it might have something to do with the color of the sky, but he couldn't prove it.

Finally, in 1881, John William Strutt, 3rd Baron Rayleigh (now known in most circles simply as Lord Rayleigh), provided the explanation: The blue color of the sky is due to air molecules which can scatter (or reflect) the light waves that pass by. If there were no air molecules, the sky would appear as black as night, and the stars would be visible even during the daylight hours. The sun would appear even brighter than it is now. Sky light is due to countless billions of air molecules and other minute dust particles called aerosols that scatter sunlight so that it can reach our eyes from all directions.

The fine ash injected by a volcanic eruption into the stratosphere can be carried by winds all over the world and exist as thin veils of dust or sulfuric acid droplets (also called sulfate aerosols) at altitudes generally between 12 to 18 miles (19 to 29 kilometers). Now when the sun sets, its rays have more atmosphere to travel though to reach our eyes, so more of the long-wavelength red light can make the journey. Sulfate aerosols add more obstacles for the light to get through and as a result the effect of sky light that is directed more toward the red end of the spectrum becomes accentuated.

The beautiful colorations associated with the Puyehue-Cordon Caulle volcano might persist for quite some time to come. Experts from Chile's national service of geology and mining have said the volcano shows no sign of stabilizing. If the eruptions intensify, it could increase the amount of ash spewed up into the stratosphere. So for those living south of the equator, the colorful sunrises and sunsets which started appearing a couple of weeks ago might indeed continue for a number of days and even weeks or months.

In addition, Chilean volcanoes tend to spew more ash than North American or European volcanoes (such as Alaska’s Kasatochi or Iceland's Grimsvotn) because the magma is thicker and rises more slowly, resulting in more ash being expelled. Chile's chain of about 2,000 volcanoes is the world's second-largest after Indonesia. Some 50 to 60 volcanoes are on record as having erupted, and 500 are potentially active.

Another unusual sight that southern skywatchers might look for is a diffuse halo of light, called a Bishop's Ring around the sun and moon, which occur when the aerosols diffract the light from either source. The first recorded observation of a Bishop's Ring was by Rev. Sereno Bishop of Honolulu, after the stupendous eruption of the Krakatoa volcano of 1883. The inner rim of the ring tends to appear bluish white while the outer part of the ring is tinted in hues of browns, reds or even purple. The area of the sky enclosed by the ring is significantly brighter than its surroundings.

Deep-red sunsets and Bishop's Rings were also widely seen after the massive eruption of the Philippines' Mount Pinatubo volcano in 1991, though that eruption was on a far larger scale than Puyehue-Cordon Caulle. In fact, the ash and aerosols that spewed from Mount Pinatubo covered much of the Northern Hemisphere for a couple of years acting almost like a gigantic sunscreen; they were so pervasive that global temperatures in the year after the eruption were cooler than normal.