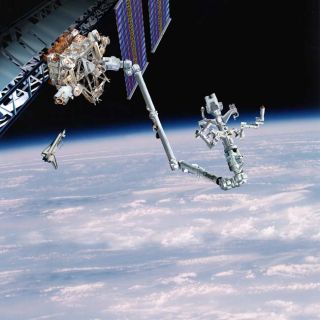 An artist's concept of the Canadarm2 system - Mobile Base System, Canadarm2, and SPDM (not completed).
(Image: © Canadian Space Agency)

The International SpaceStation (ISS)'s robotic arm successfully grappled onto a fixture on theoutpost's exterior with no direction from the two astronauts currently onboard.

Robotics officer Ian Millsthen took over for the unlatching maneuver, which Expedition 11 flight engineerJohn Phillips will observe from aboard the ISS, they added.

Controlling the spacestation's robot arm remotely has been a goal for flight controllers in order toallow ISS crews more free time to pursue science and other work aboard outpost.By proving the arm can be operated from the ground during intricate maneuvers,station controllers hope it might aid astronauts during future spacewalks whenthe ISS is left void of human crew.

ISS crews have been reducedto two people, down from a nominal three-person contingent, since the groundingof NASA's space shuttle fleet after the Columbia accident.

The last three spacestation crews, Expeditions 8 through 10, have left the ISS empty of humanoperators during their spacewalks. Phillips and Expedition 11 commander Sergei Krikalev are due toconduct two spacewalks during their own mission.

Today's successful grappletest follows a previous test in February, during which ground controllers wavedthe arm's free end around in five-foot increments while keeping it a safedistance from ISS hardware.

Remote Access: Canadarm 2Gets a Hand From Ground Control