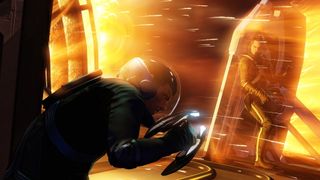 As part of the E3 video game conference, Paramount Digital Entertainment has announced a new Star Trek game is coming to consoles and PC in summer 2012. Rather than no-name or player-created characters, as in previous games, this puts you in the new movie universe and lets players play as both Captain Kirk and the Vulcan Mr. Spock.

With co-op gameplay letting two friends become these space-faring legends, the game's story will be a new chapter within the current film universe. Marianne Krawczyk, writer of the action-adventure game God of War, is teaming up with Star Trek film producers and co-writers Bob Orci and Alex Kurtzman for the new story.

The summer 2012 title also has the co-operation of Bad Robot, K/O Paper Products and Damon Lindelof. Developer Digital Extremes, known for Bioshock 2 and the Fall 2011 comic book video game The Darkness II, will take on development duties for the adventure.

Expect more on Star Trek and all the latest video game news from E3 2011 all week long across the TechMediaNetwork.

This story has been provided by Newsarama, a sister site of SPACE.com. Visit Newsarama on Facebook and Twitter.