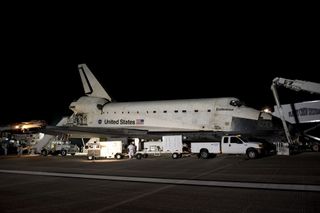 The landing convoy that will secure space shuttle Endeavour for towing to its processing hangar encircles the vehicle landing on the Shuttle Landing Facility's Runway 15 at NASA's Kennedy Space Center in Florida, on June 1, 2011.
(Image: © NASA/Kim Shiflett)

With its final space mission in the history books, the shuttle Endeavour begins preparations for a life of leisure as a museum showpiece.

Endeavour touched down at NASA's Kennedy Space Center in Florida before sunrise today (June 1), bringing an end to its 16-day STS-134 spaceflight. Only one mission now remains for NASA's fleet of space shuttles: the STS-135 flight of Atlantis, scheduled to launch July 8.

After a lengthy decommissioning process, Endeavour, the youngest orbiter in the fleet, should be ready to be shipped out west for display at the California Science Center in Los Angeles by next spring.

"I imagine millions of people, hopefully millions of people a year, will get to enjoy getting up close to the space shuttle," STS-134 commander Mark Kelly told reporters from orbit yesterday. "I think we all look forward to visiting it in the science museum there. But it is a bittersweet moment. It's been a great spacecraft." [Photos: Shuttle Endeavour's Final Mission]

NASA is retiring its space shuttle fleet after 30 years of spaceflight to make way for new deep-space missions aimed at visiting an asteroid by 2025 and Mars by the mid-2030s.

Transforming Endeavour from a flight-ready shuttle into a museum specimen is an involved process that will take months. And it will begin almost immediately, NASA officials said.

Shortly after landing, Endeavour was rolled into Orbiter Processing Facility No. 1 at Kennedy Space Center for technicians to begin removing supplies and cargo, as they would following any shuttle mission. These activities should take several weeks, NASA officials said.

When that's done, workers will begin the decommissioning process in earnest, taking some of Endeavour apart. They'll remove the thruster system inside the shuttle's nose, for example, as well as the big engines on either side of its tail. [Infographic: NASA's Space Shuttle From Top to Bottom]

These parts will be shipped to a NASA facility in White Sands, N.M., for thorough decontamination.

"This is for 'museum-clean,'" said Allard Beutel, NASA spokesman at Kennedy Space Center. "They're completely flushing out the system. Twenty years from now, we don't want some sort of piping to degrade and suddenly drip hydrazine [rocket fuel] on people."

The parts will then be reattached to Endeavour at KSC, though the main engines will be replicas. NASA will keep the original ones, which could be useful references in the design or testing of new equipment, officials have said.

The decommissioning work, while not old hat for NASA, is not unprecedented, either. The agency has already begun the transition work on the shuttle Discovery, which wrapped up its final mission, STS-133,  in March. Discovery sits right next door to Endeavour, in Orbital Processing Facility No. 2, where it is being readied for display at the Smithsonian Air & Space Museum in Washington, D.C.

"Discovery, as of early May, officially is considered no longer a flight-status shuttle," Beutel told SPACE.com. "It's considered in transition to retirement."

Discovery should be ready for transport to the Smithsonian by January or February, Beutel said. De-commissioning work on Endeavour and then Atlantis will be finished shortly thereafter, in staggered shifts. Atlantis is bound for display at the Kennedy Space Center's Visitors Complex.

The long lag time may be appreciated by the various museums. They learned only on April 12 that they were chosen, out of a field of 21 contenders, to display a shuttle.

"This longer process allows everybody to prepare to get the shuttles," Beutel said.

New York City's Intrepid Sea, Air & Space Museum will get Enterprise, a prototype shuttle that made some glide tests but never reached space.

A farewell tour for Endeavour?

When Endeavour is all scrubbed up and ready for display, it will hitch a ride to Los Angeles aboard a modified Boeing 747 carrier aircraft.

This transport aircraft will have to refuel several times during the journey from Florida, Beutel said.

NASA is considering turning the refueling stops into meet-and-greet sessions with the public, making Endeavour's last journey something of a farewell tour. But that's just an idea at the moment, not a definitive plan.

"That's all very preliminary," Beutel said. "A lot of logistics would have to be worked out."

A farewell tour would give more people a chance to know and appreciate Endeavour, which made 25 successful missions to Earth orbit and back.

"I just love this vehicle," STS-134 pilot Greg Johnson told reporters yesterday. "This vehicle is a wonderful machine, and it's an honor and a privilege for each one of us to be part of her final flight."