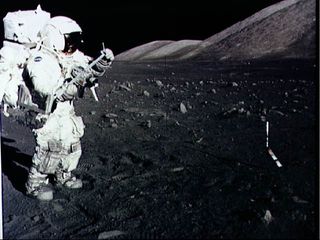 NASA should be scrapped in favor of a new agency, one with the sole objective of furthering America's exploration of deep space. So says Harrison Schmitt, the last man to set foot on the moon, in a proposal published online today (May 25).

Schmitt, a member of Apollo 17 in 1972 and later a one-term U.S. senator, proposed that the new space agency be called the National Space Exploration Administration.

Fifty years after John F. Kennedy's famous speech that set America on its glorious path to the moon, Schmitt, 75, said NASA has lost its focus. The Apollo program helped win the Cold War, strengthened national unity and set up the United States to take control of lunar resources, but NASA has withered under later presidencies, including Barack Obama's, Schmitt said.

"I don't blame NASA as much as I blame various administrations for not recognizing the geopolitical importance of space," he told SPACE.com. [Video: President Kennedy's Moonshot Moment]

Schmitt's call for overhauling the space program is partly a response to Obama's 2012 budget, which critics say increased the funding for space technology research at NASA but did not provide adequate funding for deep-space exploration.

Other Apollo astronauts have lamented the lack of focus on exploration.

In a May 24 op-ed in USA Today, Apollo mission commanders Neil Armstrong, Jim Lovell and Gene Cernan wrote, "After a half-century of remarkable progress, a coherent plan for maintaining America's leadership in space exploration is no longer apparent."

Apollo 17 crewmates Cernan and Schmitt were the world's last moonwalkers.

If formed in 2013, the proposed NSEA could send Americans back to the moon by 2020, Schmitt says, and establish lunar settlements and Mars exploration and settlements in the decades after that. It also would develop the ability to deflect Earth-bound asteroids. All of NASA's current scientific endeavors would be within the purview of the National Science Foundation and other government-funded science organizations.

The significance of space

Schmitt believes refocusing on space exploration is crucial for the United States to maintain its status as a superpower. [Photos: John F. Kennedy's NASA Legacy]

"This is not just a competition between nations; it's a competition between freedom and tyranny," Schmitt said. "The United States is the only power on Earth today that has in its DNA a protection of liberty, and if we decide to back off from space or any other major human endeavor, then we put that liberty in jeopardy.

"The Obama administration has basically said that they won't pursue an exceptional space program for the United States and that they're just as happy to have China move forward into deep space, and be dependent on Russia for transport to the International Space Station."

Schmitt, who was elected to the Senate in 1976 as a Republican from New Mexico, says China's domination of deep space and Russia's domination of near-Earth space would lower America's international standing of the U.S. in the same way the Soviet Union winning the space race would have changed the outcome of the Cold War.

On top of the perceptions and politics, Schmitt argues that deep-space exploration is necessary for controlling space resources ? in particular, a fusion fuel called helium-3 that comes from the sun and is preserved in lunar soils. "Under certain financial constraints, helium-3 can be economically viable as a fuel for fusion power reactors here on Earth, and to have that dominated by another power such as China I think would be very dangerous for us. That's just another aspect of the geopolitical significance of exploration," Schmitt said.

In the 1960s, pride in the Apollo program strengthened national unity and rejuvenated science and math education in schools. Schmitt believes the same things could happen — and need to happen — again.

Funding the NSEA (as well as increasing the funding of the other programs that would take over NASA's science departments) would cost $2 billion to $3 billion more than NASA currently costs taxpayers, Schmitt estimated. He believes taxpayers would be willing to foot the bill.

"I think the American public is very, very supportive of vigorous American activities in space," Schmitt said. "Survey after survey has shown that."