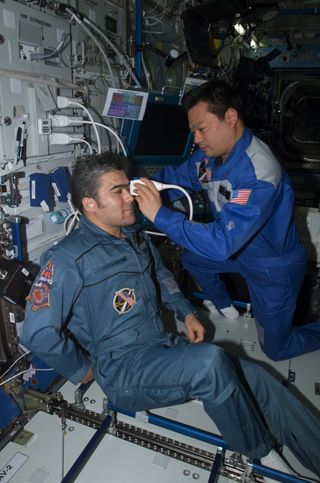 Astronaut Leroy Chiao performs an ultrasound examination of the eye on cosmonaut Salizhan Sharipov aboard the International Space Station. NASA helped turn the station's ultrasound machine into an all-purpose diagnostic imager with a direct line to doctors on Earth. The technology could soon help diagnose sick people in isolated communities around the world.
(Image: © NASA)

NASA's primary charter is to explore and better understand the cosmos. But much of the technology NASA developed in reaching for the stars has filtered down to the masses, leading to innovations like more nutritious infant formula and sunglasses that block harmful ultraviolet light.

"We get better airplanes, or we get better weather forecasting from space stuff, sure," said Daniel Lockney, program executive in technology transfer and spinoff partnerships at NASA headquarters in Washington, D.C. "But we also get better-fed children. That kind of stuff, people don't necessarily associate."

Some of the highlights

Some of the technologies most closely associated with NASA were utilized — and in some cases popularized — by the space agency rather than invented by its scientists.

There's the orange-flavored drink Tang, for instance, which was developed by General Foods in 1957. Or Velcro, a Swiss invention from the 1940s. Or Teflon, a synthetic polymer that has found widespread use as an industrial lubricant and a nonstick coating for pots and pans.

"Teflon we get all the time," Lockney told SPACE.com. "But that was DuPont."

But the list of NASA inventions that have benefited the public is long and storied. There's "memory foam," for example, which today pads the helmets of football players and is used to manufacture prosthetic limbs. NASA scientists invented the substance in 1966 to make airplane seats safer and more comfortable.

NASA research investigating the nutritional value of algae led to the discovery of a nutrient that had previously only been found in human breast milk. The compound, which is thought to be important to eye and brain development, has since found its way into 95 percent of the infant formula sold in the United States, Lockney said.

There are many more. NASA research led to the development of sunglasses that block damaging blue and ultraviolet light, for example. One-third of all cell phone cameras use technology originally developed for NASA spacecraft.

And in the 1960s, NASA scientists who wanted to enhance pictures of the moon invented digital image processing. The technology later found many other applications — particularly in the medical field, where it helped enable body-imaging techniques such as CATScans and Magnetic Resonance Imaging (MRI).

Since 1976, NASA has been publishing a magazine called "Spinoff" that describes some of the technologies that have found their way into ordinary folks' lives. "Spinoff" has detailed 1,723 such inventions to date, Lockney said — and that list is far from exhaustive.

"We've got a very limited page count," Lockney said. "So there's stuff that doesn't get put in the book."

Last year alone, Lockney added, NASA recorded more than 1,400 new inventions within the agency. While the journey from invention to useful product is long and difficult — and many technologies fail to make it all the way — that number gives an idea of the creative juices flowing within NASA.

Of course, that creativity is focused mainly on trying to understand what makes the universe tick, and on figuring out how to explore our neck of the cosmic woods safely and efficiently.

While the agency is happy that much of its technology eventually finds some application here on Earth — transferring technologies for the good of the public is part of NASA's charter, Lockney said — it's always aiming higher.

"The real emphasis is on exploration technology and innovation," Lockney said. "This is kind of the sauce on the plate. This isn't the entree."