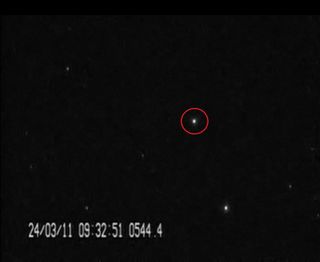 This still image taken from a video by Canadian skywatcher Kevin Fetter shows the X-37B space plane, known as the Orbital Test Vehicle 2, as it passed over his site on March 24, 2011.
(Image: © Kevin Fetter)

After an intense search, a crew of amateur satellite sleuths has spotted the U.S. Air Force's second X-37B space plane – a robotic spacecraft that launched into orbit March 5.

The mission of the unmanned X-37B space plane, which is known officially as the Orbital Test Vehicle 2 (OTV-2), is shrouded in secrecy. The Boeing-built spacecraft is believed to be involved in reconnaissance — perhaps testing powerful sensors for a new generation of spy satellites. It looks much like a small version of NASA's space shuttles and blasted off from the Space Launch Complex 41 at Cape Canaveral Air Force Station in Florida.

While its mission is secret, the OTV-2 itself has attracted the eyes of dedicated skywatchers hoping to spot it in orbit just as they saw its predecessor – the first X-37B spacecraft, OTV-1 – during the OTV-1's months-long flight last year.

Fetter was successful in getting video of the OTV-2 gliding past the binary star Eta Serpentis on March 24. The OTV-2 and the star can easily be seen with the naked eye, shining at a magnitude 3 on the scale astronomers use to measure the brightness of sky objects (with the lowest numbers representing the greatest brightness).

Many satellites and spacecraft are regularly tracked by skywatchers. The International Space Station, for example, can appear to the unaided eye to outshine Venus and the brightest star in the sky, Sirius, under optimum viewing conditions. [Photos: Spotting Spaceships From Earth]

But to find satellites and spacecraft in orbit, skywatchers need to know ahead of time where to look. The secretive nature of the OTV-2's mission for the U.S. military made that task very difficult.

Once the OTV-2 launched, satellite watchers started scanning the skies for a glimpse of it. Skywatcher Ted Molczan of Toronto developed a set of orbital elements based chiefly on last year's OTV-1 flight to help prospective observers in the search.

And days after the launch, on March 9, Molczan announced that OTV-2 had been sighted by satellite tracker Greg Roberts of Cape Town, South Africa. Roberts spotted the spacecraft "in difficult observing conditions," Molczan reported.

Within days, other observers made sightings as well.

The orbital inclination of the space plane has been determined by Molczan to be 42.8 degrees with respect to Earth's equator, which means it can appear over regions as far north as Boston; as far south as New Zealand's South Island.

While the exact mission of the X-37B space plane is classified, quite a bit is publicly known about the spacecraft's design, because it originally started out in 1999 as a NASA project.

The vehicle has a blunt nose, payload bay and stubby wings, which make it look somewhat like a NASA space shuttle, although it's only about a quarter of the length. A solar array packed inside the X-37B's truck bed-size payload bay allows it to stay  in space for months at a time.

By 2006, after the Department of Defense and the Air Force took over the program,  a cloak of secrecy descended on both the project's budget and future missions.  The first X-37B launched April 22, 2010, with officials keeping its orbital flight path secret, but amateur skywatchers found and tracked it anyway.

Roberts and Fetter independently spotted a mystery object on May 20;  Molczan was able to combine the two observations and determined that the object was indeed the OTV-1.

Oddly enough, Fetter had stumbled across the space plane by chance on video while looking for something else. By contrast, Roberts made a concerted effort to spot the OTV-1, performing numerous searches after its launch.  He caught it eight hours after Fetter.

Fetter was able to find OTV-1 again on the very next night, as it passed the third-magnitude star Sadalsuud in the constellation Aquarius.

Molczan posted the orbital elements of the OTV-1 flight on SeeSat-L – an Internet mailing list composed of avid satellite watchers around the world.  Molczan is the site's moderator.

Soon, many others were watching as well. In terms of brightness, the OTV-1 usually appeared as bright as third or fourth magnitude, corresponding in brightness to a medium-to-faint star.  But on some occasions, it was brighter.

A first-time observer in Fort Davis, Texas, commented, "It was easy to see. I estimated its magnitude at about +2.8."  And another observer from Bradenton, Fla., caught the space plane brightening suddenly to a surprising magnitude of -0.8, or about twice as bright as Arcturus, one of the brightest stars in the sky. Perhaps a favorably placed glint of sunlight briefly reflected off a solar panel to cause the flare-up in brightness.

So what is the OTV-2 viewing schedule for your particular hometown? You can easily find out by visiting one of these three web sites:

Real time Satellite Tracking shows you at any given moment during the day or night over what part of the Earth any satellite happens to be.  When you initially log on, you will see a map that is tracking the International Space Station.  To switch to the OTV-2, look under the listing "Just Launched"; then click on OTV 2 (USA 226). When the page is switched, just click on Single Tracking/Track it now!

You'll then be able to see where the OTV-2 is.  In addition, on the right-hand side of the page is a five-day Predictions link, which will provide you with specifics on any potentially visible pass over the course of the next five days.

Then there is Heavens-Above. Once you become a registered user, look on the home page under Satellites, and click on "Select another satellite" (from the database).  In the box for "US Space Command ID:" type the number 37375.

You'll be taken to a new page, "Satellite Search Results," where you'll find a link for "OTV 2 (USA 226) in Earth orbit."  On this new information page, just click on "Passes (visible)," which will provide you with a listing of when OTV-2 will be passing over your area during the next 10 days.