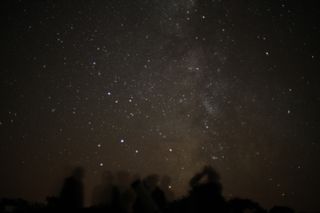 Stargazers on the Isle of Sark, in the Channel Islands off the coast of England, enjoy the wonder of the Milky Way.
(Image: © Martin Morgan-Taylor)

It's a question that many people who popularize astronomy get asked time and again: "How many stars are there?" And while the sky is packed with a myriad of stars, the number visible to skywatchers depends greatly on the local night sky and the impact of city lights.

With Earth Hour 2011 set for 8:30 p.m. local time on Saturday (March 26), now is an opportune time to take a look at the impact of light pollution on the night sky. Earth Hour is a movement that encourages the public to switch off their lights for one hour to conserve power and take a stand against climate change.

For stargazers graced with clear night skies, far from populated areas, there are some 8,479 stars that can be seen by the unaided eye. But not all of them are visible at the same time, since some will be below the horizon. Atmospheric interference can have an effect too, making the number of stars typically visible at one time on a given night closer to about 2,500, give or take a few. [Amazing Night Sky Photos From Chile Observatory]

But light pollution can change all that.

Polluting the sky with city lights

Light pollution is the excessive or misdirected outdoor lighting that is threatening to destroy virtually all casual stargazing. Throughout much of the United States for instance, millions upon millions of precious watts are wasted because poorly designed streetlamps send a portion of their light into the sky.

Over the past two decades, the increase in this ubiquitous, overly bright and garish lighting has so polluted the nighttime environment that driving on some roadways has become downright dangerous because of excessive glare.

The majority of lights on our streets and highways are of the high-pressure sodium vapor variety. They are, to say the least, ugly, overly bright energy-wasters. In some of the most extreme cases, drivers even have to lower their sun visors!

Sadly, we are also losing our view of the night sky – the next endangered natural resource. A generation from now, if the current siege of “light blight” goes unchecked, seeing the stars will be reduced to a museum rendition, with the artificial firmament of your local planetarium becoming our children’s only view of the universe.

Let’s take the Greater New York area as an example.

Astronomers measure the brightness of stars in a reverse magnitude scale, so the lower the magnitude value, the brighter a star appears in the sky. On clear nights with unpolluted sky views, the unaided human eye can detect stars shining at magnitude of +6 or brighter. Sirius, the brightest star in the sky, boasts a magnitude of -1.44.

For skywatchers in the immediate suburbs around New York City, the brightest sky object visible would have to be a magnitude +4. This corresponds to roughly 250 visible stars, or one-tenth the number that can be perceived under perfectly dark skies.

From the outer boroughs of New York City (Brooklyn, Queens, Staten Island and The Bronx), the limiting magnitude is likely closer to +3, suggesting that, at best, only about 50 stars might be seen at any one time.

And, from brightly-lit midtown Manhattan, the brightest star visible would have to be a magnitude +2, meaning that from the heart of New York City folks should consider themselves extremely lucky to see more than 15 stars at any one time!

But there are solutions to this problem. Light pollution can be controlled and even reduced.

As one example, this can be done by investing in more efficient, properly shielded lighting fixtures; determining systematic criteria for how much lighting is needed in a given situation; and perhaps even imposing late-night "curfews" on outdoor advertising signs.

Then there’s the International Dark-Sky Association (IDA), founded in 1988, which gathers and disseminates light pollution information and solutions. It has played a pivotal role in turning the tide in the light pollution war.

The IDA is winning over key sectors of the non-astronomical public – including government groups, sections of the lighting industry and the electric utilities – with the argument that good lighting for astronomers equals energy savings and more attractive surroundings for everyone else. The IDA’s work is funded by nearly 10,000 contributing members.

You can do your part, by learning more about light pollution and the IDA, and by taking steps to reduce extra nighttime lighting in your own town and backyard. These steps may not only enable you to see the stars better, but could also save you money on electricity and help reduce the world's energy crises.

Not convinced extra lighting is a problem?  Check out this interesting website for nighttime satellite views of the world from geology.com.

Finally, there is Earth Hour, a movement established in 2007 in Sydney, Australia, when 2.2 million individuals and more than 2,000 businesses turned their lights off for one hour to take a stand against climate change. Just one year later, Earth Hour had become a global sustainability movement with more than 50 million people across 35 countries participating.

During the hour, global landmarks such as the Sydney Harbour Bridge, CN Tower in Toronto, the Empire State Building in New York, Golden Gate Bridge in San Francisco, and Rome’s Coliseum all stand in darkness, as symbols of hope for a cause that grows more urgent by the hour.

This year will be no different.