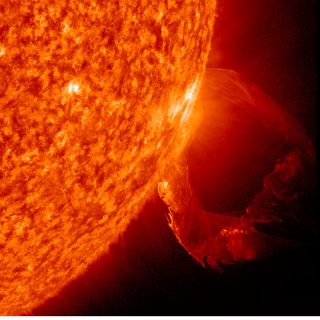 NASA's Solar Dynamics Observatory spacecraft captured this eruption from March 19, 2011 as a prominence became unstable and blasted into space with a distinct twisting motion.
(Image: © NASA/SDO/GSFC)

A NASA spacecraft watching the sun has caught a dazzling view of a solar eruption that launched a vast tendril of magnetic plasma into space.

NASA's Solar Dynamics Observatory recorded the sun tentacle, which scientists call a solar prominence, on March 19 as it erupted into space with a rounded, twisting motion.

The eruption occurred over five hours as SDO watched the sun in the ultraviolet range of the light spectrum, SDO mission scientists said in a statement. The solar observatory watched as the prominence twisted up from the sun and expanded, then became unstable. [Video: Round Eruption From the Sun]

Ultimately, the sun filament lost cohesion and its particles streamed away from the sun.

"Prominences are elongated clouds of plasma that hover above the sun's surface, tethered by magnetic forces," SDO mission scientists explained.

The sun is currently in the midst of an active phase of its 11-year solar weather cycle and has kicked up a series of powerful eruptions and flares in recent months. The SDO spacecraft and other space observatories are keeping a close watch on the sun to monitor is solar weather activity. [Amazing Sun Photos from Space]

Strong solar flares, when aimed at Earth, can potentially disrupt satellites and power grids, as well as pose a hazard to astronauts on spacecraft. They can also spark dazzling shows of the northern lights, or aurora borealis.