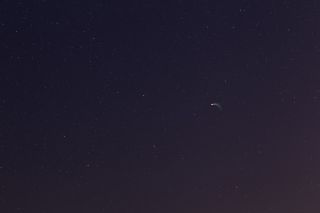 CAPE CANAVERAL, Fla. – A fortuitous skywatching moment made for a beautiful image of the space shuttle Discovery in the night sky, even though what's really happening in the picture is slightly less poetic.

What looked like a bright shooting star with a wide, curly tail is most likely Discovery performing a waste water dump while soaring in orbit near the end of its 39th and final mission. [Images: Discovery's Final Flight]

Jens Hackmann of Weikersheim, Germany recorded the special moment in a short movie that appeared on Spaceweather.com. In the images and movie from March 8, Discovery is visible in the twilight skies over Europe, leaving a trail of what may be frozen, crystallized urine and waste water, disposed in preparation for the shuttle's landing the next day. The liquid could also be exccess water from Discovery's fuel cells.

"When observing ISS and space shuttle Discovery with unaided eye, there was nothing special for me," Hackmann wrote in the caption of his video on YouTube. "But when I examined the video clip I wondered what that tail on Discovery was…Then I read in the internet about other sights."

Such water dumps are a usual event, allowing the spaceship to unload its dirty water and urine before returning to Earth. A similar disposal gave skywatchers a nice view during the shuttle Discovery's STS-128 mission in September, 2009 as well.

Waste water usually freezes upon jettison into a cloud of tiny ice droplets. Then when the sun hits the droplets, the ice sublimates directly into water vapor and disperses in space.

Discovery launched on its final mission on Feb. 24, after months of delays due to issues with the shuttle's external fuel tank. On this last journey into space, Discovery's STS-133 mission delivered supplies, hardware, a new storage room and a humanoid robot called Robonaut 2 to the International Space Station and its residents.

After an 8-day visit at the space station, Discovery undocked on March 7, and spent two days in orbit before landing for the final time at NASA's Kennedy Space Center on March 9. After 27 years and 39 flights, Discovery will now be retired from service, as NASA brings its space shuttle program to an end.

The agency has two more planned shuttle flights before retiring the rest of its orbiter fleet – the STS-134 flight of Endeavour, which launches April 19, and the very last STS-135 flight of Atlantis, which is slated to lift off on June 28.