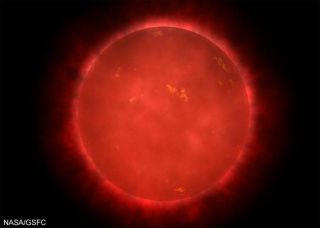 Astronomical detectives have assembled a stellar lineup, identifying a handful of nearby stars that may come close enough to disturb our solar system in the next billion years or so.

Researchers calculated the orbits of 40,000 low-mass M-dwarf stars and found 18 that may come dangerously close to our cosmic neighborhood in the next billion years. While the chances of this actually happening are probably slim, researchers said, the results could be dramatic.

"The probability of an M dwarf running into the sun is essentially zero," said study lead author John Bochanski of Pennsylvania State University, who presented the results in Seattle last month at the 217th meeting of the American Astronomical Society. "But if one just came close, it could still cause comet showers."

Bochanski and his colleagues mined a catalog of 40,000 M dwarf stars, which are a common type of red dwarf. More than 70 percent of all stars are M dwarfs, Bochanski said.

The catalogue provided radial velocities, distances and proper motions for these stars. The researchers took that information and used it to model the stars' orbits over the next billion years. They initially did this as part of a separate study, which sought to use the stars as tracers of the Milky Way's disk, Bochanski said.

But the team realized it wasn't a far leap to see which of the 40,000 M dwarfs might come close enough to disrupt our celestial neighborhood — perhaps by flinging comets toward the inner solar system.

As it turned out, the team identified 18 stars with so-called "Nemesis orbits," named after the hypothetical dwarf star that some scientists think may be circling the sun from far, far away. These 18 approach fairly close to the sun, retreat, then come back again over time.

Some scientists have invoked the putative distant companion "Nemesis" to explain a perceived periodicity in mass extinctions on Earth. Nemesis could be disturbing comets from the Oort cloud — a large swarm of space rocks surrounding the solar system — at regular intervals, the argument goes, resulting in big, destructive impact events on Earth.

No need to worry

Uncertainties in the team's calculations are large, especially toward the later end of the billion-year time scale. But it appears that chances of an encounter between our sun and any of these 18 stars in the near future are slim.

There is evidence for only a handful of encounters in the nearly 5 billion-year history of the solar system, Bochanski said. He guesses that of the 18 suspect stars, perhaps one will come close enough to make its presence felt in the next billion years — and that estimate's probably on the high end.

"It's a very unlikely event," Bochanski said. "But we have identified some of the best candidates for that encounter."