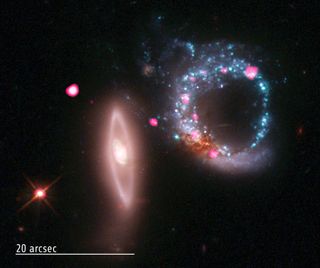 This image of the two galaxies that form Arp 147 shows a vast cosmic ring of stars (blue) and black holes (pink) as seen by the Chandra X-ray Observatory and Hubble Space Telescope. Another galaxy is also visible (vertical at left), as well as a bright star and quasar (pink object at upper left). This image was released on Feb. 9, 2011.
(Image: © NASA/CXC/MIT/S.Rappaport et al, Optical: NASA/STScI)

Rings of gold and precious jewels may be traditional gifts between lovebirds on Valentine's Day, but what about a giant ring of black holes? A stunning image from space reveals just that.

Arp 147 is about 430 million light-years from Earth in the constellation Cetus, the Whale. It contains the mixed-up leftovers from the collision of a spiral galaxy and an elliptical galaxy that unleashed an expanding wave of star formation.

It is the wave of stars that creates the ring effect. The wave's collection of massive young stars gives it a gleaming blue hue. But these stars as huge and short-lived, lasting no more than a few million years before they explode as supernovas or collapse into black holes.

The black holes pepper the ring like cosmic jewels, with their powerful X-ray emissions appearing as bright pink specks. Another galaxy is also present in the image, appearing as a dull red, along with a bright star and distant quasar.

To make the newly released Arp 147 image, NASA combined observations from the Chandra X-ray Observatory (which captured the black holes) and the Hubble Space Telescope (visible light).  Other observations by NASA's Spitzer Space Telescope in the infrared range, and ultraviolet studies using the space agency's Galaxy Evolution Explorer, have given astronomers an idea of how fast stars are forming within the ring.

Scientists estimate that the most intense period of star formation ended 15 million years ago, according to a NASA statement. A study based on the combined Arp 147 observations was detailed in the Oct. 1 edition of the Astrophysical Journal.