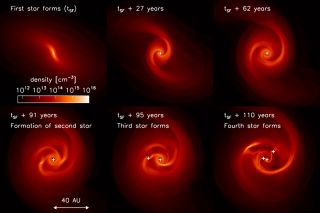 This time sequence of the disk evolution of the first protostars. After 110 years, four protostars had formed, each with a mass approximately half that of the sun.
(Image: © Clark, Glover, Smith, Greif, Klessen, Bromm (Univ.of Heidelberg, UT Austin); Texas Advanced Computing Center)

Astronomers have long believed that the early universe was a lonely place populated by huge — but solitary — stars spread across the cosmos. But a new study suggests these massive stellar loners were more the exception than the rule.

In the study, a team of astrophysicists using supercomputers have pushed the timeline of early star formation simulations further than ever before. The scientists found that most of the first protostars – the precursors to full-blown stars – likely formed not in isolation as previously thought, but in tight systems of multiple stars.

Some of these primordial multiple-star systems may have had separations as small as that between the Earth and the sun, according to the simulation.

"This simulation pushes our decade-long quest to understand the formation of the first stars one crucial step ahead," said study co-investigator Volker Bromm, an astronomer with University of Texas at Austin, in a statement. With the study in hand, "we now know that the first stars typically did not form alone," he added.

Astronomers estimate that the universe began 13.7 billion years ago with the Big Bang.

At the time, the universe was essentially a smooth place, with only small, isolated clumps of hydrogen and helium. Over time, gravity drew these clumps together into clouds of gas. The protostars that formed in the center of these clouds had masses of just one-hundredth the mass of our sun, researchers said.

The gravitational pull of the protostar collected the remaining gas into a rotating disk. For years, simulations have shown no disruptions in these stellar disks.

Previous theories surmised that the gas continued to fall into the disk's center, ultimately creating a massive mega-star ranging from 30 to 300 times the mass of our sun. While other recent studies have suggested the potential of binary systems rising up from such disks, these were thought to be rarities, researchers said.

But in the new study, which was led by astrophysicist Paul Clark at Heidelberg University in Germany, scientists expanded the length of time the simulation ran to tens of thousands of years.

The research is detailed in the Feb. 3 edition of the journal Science.

Most simulations concluded not long after the initial disk formed, because of the prohibitive computational cost. Clark and his colleagues used KOLOB, the first supercomputer based on graphical processing units, as well as the Texas Advanced Computing Center to extend the simulations much longer.

Their tests revealed the isolated stellar disks were, in fact, likely to fragment.

"At some point, the disk becomes so heavy, so massive, that it becomes gravitationally unstable," Bromm told SPACE.com. It then begins to collapse in on itself and form other protostars, he explained.

The simulation also suggests that if conditions are just right, some of the first stars could have been ejected from their local stellar groups over time. If these stars had not yet accreted enough matter to swell to massive proportions, they could still be visible today, researchers said.

Over the course of the simulation, four to five protostars were created within the gas.

Although the team could not predict how the disks evolved beyond the initial stage (due to computational limitations), Bromm noted that the formation of new stars seemed to taper off.

"There's a window of opportunity for fragmentation," Bromm said.

As each individual protostar accretes more material, it radiates heat, eventually ionizing the cloud and ending the fragmentation process.

The initial protostar remains largest, still well within the high mass range predicted by the previous model. Instead of existing in isolation, however, it finds itself accompanied by a small group of low mass companions.

Where once such a group would have been regarded as unique, according to the simulation they should be the "almost universal outcome," researchers said.

Although their research opens up a new view of the early universe, the team's work is far from complete. They intend to run further simulations, in hopes of determining the final outcome of the disk.

"The accretion of mass takes hundreds of thousands of years," Bromm said. "Our simulation ends at 10,000."