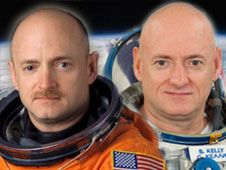 Mark Kelly, the astronaut husband of Congresswoman Gabrielle Giffords (D-Ariz.), is weighing the tough decision of whether to command his planned April space shuttle mission, or step down to remain by his wife's side.

Giffords is recovering from a bullet wound to the head she received when a man opened fire at a constituent meeting she was holding at a Tucson, Ariz., grocery store Jan. 8.

Neither NASA nor Kelly have so far indicated which way the decision will go, though NASA appointed veteran astronaut Rick Sturckow to serve as a backup commander during training for the STS-134 mission, which is the final flight of the space shuttle Endeavour. The mission is set to launch April 19.

Kelly's twin brother, Scott Kelly, is also an astronaut and is currently serving a long-duration stint onboard the International Space Station's Expedition 26 mission. Scott Kelly told reporters Wednesday that he had an idea which way his brother was leaning, but that he'd leave it to Mark Kelly and NASA to make the announcement.

"As far as him making a decision, I think we'll hear something about that soon," Scott Kelly said. "I know he needs to certainly consult with NASA management on that. He's a pretty logical guy and very thoughtful and will certainly weigh all the different considerations when making this decision."

Scott Kelly said he and his brother had discussed the tough call about the spaceflight, which will be Mark Kelly's last chance to fly again on a space shuttle since NASA's three-orbiter fleet will retire this year. Mark Kelly has already made three previous space shuttle voyages.

"We do talk about it and we have talked about the different considerations," Scott Kelly said Wednesday. "I'm confident he's going to make a good decision, and whichever decision he chooses I'll support him."

Florida's senator Bill Nelson (D-Fla.), who flew aboard a space shuttle as a payload specialist in 1986, told ABC’s "Top Line" that there is a good chance Mark Kelly will in fact fly aboard Endeavour.

"It is a tough decision for him, but I think it's reasonable to expect that he will go on to command this mission in April, because I think Gabby is significantly improving every day," Nelson said.

Mark Kelly has confirmed that Giffords is making steady improvements.

"Today was a huge day for GG. Lots of progress!" he tweeted yesterday (Feb. 2).

He also spoke Thursday at the National Prayer Breakfast in Washington, D.C.

He asked for people to continue to keep his wife in their prayers, and he prayed that some good may come out of this tragic event if people can unite to meet the challenges our country faces.