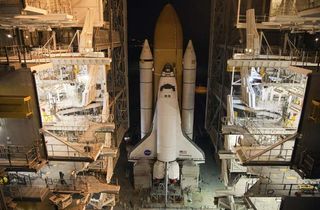 The space shuttle Discovery was rolled back to the Vehicle Assembly Building at NASA's Kennedy Space Center in Florida to allow crews to take x-ray scans beneath the foam insulation of all 108 support beams on Discovery's external tank.
(Image: © NASA/Frank Michaux)

The four new cracks were discovered on the tops of threemetal ribs on the back side of the tank's midsection, opposite from Discovery.Shuttle program managers met today and elected to repair these fresh fractures inthe same way that earlier cracks found on the tank were fixed. This work willlikely begin Jan. 3, and is estimated to take two to three days.

"Any further work will be evaluated thoroughly earlynext week after additional data is reviewed," NASA officials said in astatement.

Discovery is currently slatedto launch no earlier than Feb. 3 after months of delay. The shuttle'supcoming mission to the International Space Station will be the finalflight of the workhorse orbiter before it is retired.

Attempts to launch Discovery on its final voyage in earlyNovember were delayed by weather, a gas leak and ? ultimately ? due to smallcracks found in some of the 108 aluminum ribs in the so-called intertank partof Discovery's 15-story external tank.

The intertank portion of the tank, like its name suggests,is in between the vessel's liquid hydrogen and liquid oxygen propellantreservoirs. It also houses much of the tank's wiring andinstrumentation.

Discovery rolledback to the Vehicle Assembly Building at NASA's Kennedy Space Center inCape Canaveral, Fla. last week so technicians could take a closer look at theorbiter's external tank. They took digital X-ray images of each of the 108supports ? known in NASA parlance as "stringers" ? on the exteriorof the intertank section.

Other small cracks had been found on two of these ribs ?after Discovery's launch countdown on Nov. 5 ? prompting a string of delays forcloser analysis to determine the root cause.

While those previous cracks have since been repaired,shuttle program managers opted to postpone Discovery's final launch untilFebruary to give engineers more time to understand how the cracks developed,and whether they could pose future concerns. [Gallery:Building Space Shuttle Discovery]

NASA also conducted a so-called "tanking test" onDec. 17, in which the shuttle's fuel tank was filled as it normally would be upuntil the final seconds before liftoff. Sensors that were installed on the tankrecorded data as hundreds of thousands of gallons of cryogenic propellant waspumped into, and then drained from, the external tank.

The sensors also monitored the tank's performance into thenext day as it warmed to ambient temperature.

Discovery's STS-133 flight is one two final scheduledmissions before NASA's orbiter fleet is retired in 2011. The agency is retiringthe space shuttle program in order to shift its focus toward future missions toan asteroid and Mars. NASA is hoping to launch one additional shuttle flightaround June, but it is still awaiting approval for funding from a congressionalappropriations committee.