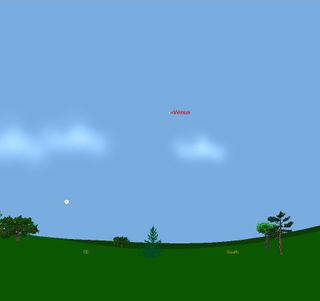 PHOENIX — Venus is so bright, you can see it even in the daytime right now — if you know where to look.

Spotting Venus in the daytime will put you in an exclusive club: the handful of folks around the world who've ever seen a planet besides our own during daylight.

Here's how to do it:

Go out before sunrise. You can't miss Venus, a brilliant beacon hovering in the predawn eastern sky.

Next, find a good reference point. I suggest standing on the west side of your house or another building and sighting Venus over the roofline. Then project where Venus will be after sunrise. It will follow the same basic path as the sun across the sky, up and to your right.

Once the sun is up, you'll have a guidepost to use in finding Venus. You don't need a telescope.

If you plan to get up before sunrise Tuesday (Dec. 14) to watch the Geminid meteor shower, you'll easily spot Venus, and you can extend the skywatching opportunity to just past dawn.

I used this technique this morning: I noted the spot where I was standing and where Venus was above the roofline, then had my wife stand in the same spot. She found it in just a few seconds. [Photos of Venus from around the world]

Our 9-year-old son had to stand a few feet behind my wife to make the geometry work, and a broad smile crossed his face as he spotted the other world and I told him about the exclusive club he'd just joined.

Venus appeared as a stark pinpoint of white light against the blue morning sky. It is extremely hard to find if you don't know exactly where to look, but once you find it, it's startling how bright it is.

This sky map of Venus after sunrise may help give you an idea of where to look after dawn to see the bright planet.

My wife and son were both curious how it's possible that another planet is visible during the day.

This is how it works:

Venus shines with reflected sunlight. Because it is closer to the sun than Earth is, its orbital path never takes it very far from the sun from our point of view. Venus is always behind or in front of the sun (when we can't see it) or off to one side (when we can see it).

That's why Venus is often called the Evening Star or the Morning Star — depending on which side of the sun it's on. That's also why you never see Venus overhead in the night sky.

Outer planets, like Jupiter, can be opposite the sun in our sky, and therefore overhead at night.

Because of its size and relative closeness to us, Venus is brighter than any other planet, and only the sun and moon shine brighter.

If you have lots of patience to gaze at Venus nonstop for several minutes, or if you don't have a roofline handy, you can simply find Venus just before the sun comes up, and keep your eye on it until the sun's rays strike your face. Either trick will work any morning this month as Venus continues to shine brightly as the Morning Star — or, as some have called it, the Christmas Star.