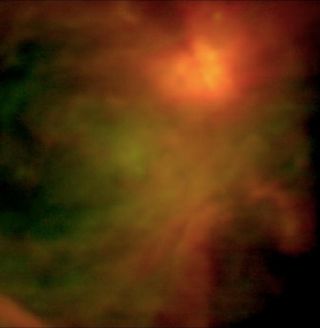 This infrared image of the heart of the Orion star-formation complex was taken from NASA's Stratospheric Observatory for Infrared Astronomy (SOFIA). This image, a two-filter false-color composite, reveals detailed structures in the clouds of star forming material, as well as heat radiating from a cluster of luminous newborn stars seen in the upper right.
(Image: © NASA/SOFIA/USRA/FORCAST team)

NASA's StratosphericObservatory for Infrared Astronomy, or SOFIA, took off froman Air Forcerunway in Palmdale, Calif., on Nov. 30. It flew for about 10 hours,capturingimages while in flight, before landing Wednesday morning, NASAofficials said.

SOFIA is a modified Boeing 747SP thatcruises at an altitudeof 39,000 to 45,000 feet (11,887 to 13,716 meters). It gets above mostof theinfrared-light-absorbing water vapor in Earth's atmosphere, affording aclearerview than ground-based infrared instruments are able to achieve. [Gallery:The Universe in Infrared]

SOFIA should therefore allowscientists to better understanda wide range of astronomical phenomena, including how stars and planetsareborn, how organic substances form in interstellar space and how supermassiveblack holes evolve, researchers said.

SOFIA is fitted with an airborneinfrared telescope 8.3 feet(2.5 meters) wide. The aircraft's instruments can analyze light from awiderange of celestial objects, including the warm interstellar gas anddust ofstar-forming regions, by observing wavelengths between 0.3 and 1,600microns,researchers said.

A micron is one millionth of a meter.For comparison, thehuman eye can see electromagnetic radiation with wavelengths between0.4 and0.7 microns.

The Nov. 30 flight marked the firstleg of SOFIA's earlyscience program. SOFIA used the Faint Object InfraRed Camera instrumenton thisflight, and will employ it on two upcoming jaunts as well, officialssaid.

In February 2011, engineers willinstall another instrument,the German Receiver for Astronomy at Terahertz Frequencies (GREAT), ontheplane. SOFIA will then make three flights with the GREAT instrumentduring thesecond phase of its science program, according to officials.

The Nov. 30 flight was not the firsttime SOFIA got off theground. The airliner snapped its firststratospheric photo during a test flight in May. And twoweeks ago, onanother test flight, it imaged areas within the Orion star-formationcomplex ?a region SOFIA investigated in more detail on the Nov. 30 flight,researcherssaid. [SOFIA image of Orion complex]