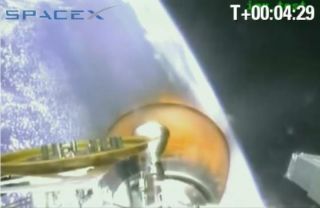 This view from a camera mounted to the second stage of the private spaceflight company SpaceX's Falcon 9 rocket shows the blue Earth fall behind as the rocket launches an unmanned Dragon space capsule on Dec. 8, 2010.
(Image: © SpaceX)

Almost immediately after commercial rocket company SpaceXlaunched its Dragon spaceship for the first time, the Twitterverse was abuzz thismorning (Dec. 8) with the news.

The hashtag #SpaceX was trending, and congratulations pouredin from all corners.

"Dragon in the sky! Congratulations to the SpaceX teamfor a successful launch," tweeted the officials behind NASA's Keplerplanet-hunting mission, while NASA's deputy administrator Lori Garver had thisto say: "Congrats to SpaceX on a picture perfect launch!"

Another planetary scientist, Caltech's Mike Brown (famousfor discovering the dwarf planet Eris), chimed in after viewing the broadcastof the camera feed from the rocket: "Whoa. The view FROM Falcon 9 isFABULOUS."

Thelaunch was also the first under NASA's COTS program (CommercialOrbital Transportation Services), which funds commercial companies to develop spacecraftcapable of carrying cargo and people to the International Space Station.

SpaceX is chronicling the mission on Twitter as @SpaceXerand @SpaceXmissions.