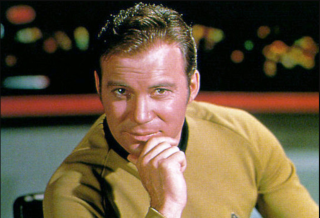 Star Trek actor William Shatner says his "Star Trek" character Captain Kirk's story is "played out," and that he has no interest in resuming the role.

"No. I think Kirk's story is pretty well played out at this point," Kirk told a fan on Twitter, who asked if the actor would consider reprising his role for a new series a la CBS All Access' "Star Trek: Picard."

In fact, Shatner isn't even interested in a cameo appearance. "I don't do cameos," he said in a subsequent tweet. "It's a throwaway part to sell DVDs."

This marks a change from Shatner's previous attitude, publicly stating in 2016 that he'd return to the role, as long as it wasn't a cameo.

"I would play an old Captain Kirk, absolutely," Shatner said at the time. "You would have [to have] an interesting character, not a cameo, like ‘Here I am, aren't I interesting?’ It's the ongoing world, it’s the world within science-fiction. Yes, you age within the universe. Time goes on, but time bends, as well. There’s so many things you could do."

As for the new Captain Kirk, Chris Pine, his adventures in the rebooted Star Trek film series may resume in an in-development fourth film, though co-star Simon Pegg who plays Scotty (and who wrote "Star Trek Beyond"), has cast some doubt on that notion.

"I don't know. The fact is, Star Trek movies don't make Marvel money. They make maybe $500m at the most, and to make one now, on the scale they've set themselves, is $200m," Pegg told GamesRadar. "You have to make three times that to make a profit. I don't feel like the last one… They didn't really take advantage of the 50th anniversary. The regimen at the time dropped the ball on the promo of the film."

"And we've lost momentum. I think losing Anton [Yelchin] was a huge blow to our little family, and our enthusiasm to do another one might have been affected by that. So I don't know," he concluded.