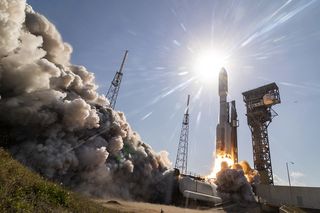 The Space Force can't afford to shelter in place.

The Atlas V was cleared to fly even though many activities around the nation and the world — including other rocket launches — have been grounded by the coronavirus pandemic. The launch was approved because the $1.4 billion AEHF-6 satellite is essential to national security, U.S. military officials said.

"Even in the face of a global pandemic, like the current COVID-19 crisis, we must continue to perform mission-essential tasks," Lt. Gen. John F. Thompson, commander of the Space and Missile Systems Center at Los Angeles Air Force Base, said in an interview with United Launch Alliance representatives that aired during the AEHF-6 launch webcast.

(COVID-19 is the disease caused by the new coronavirus. As of Friday, March 27, COVID-19 had killed more than 25,000 people worldwide, according to data compiled by Johns Hopkins University.)

AEHF-6 "is designated mission-essential, and it's because the AEHF constellation supports the president of the United States, other national leaders and the joint forces with critical strategic communications around the planet," Thompson said. "And this particular launch extends that capability out into the timeframe beyond 2030."

But Thompson also stressed that COVID-19 was very much on the minds of the AEHF-6 launch team, which took "every precaution to ensure our workforce is safe."

.@SpaceForceCSO addresses the force on the spread of #COVID19. pic.twitter.com/aM9R6ApgXcMarch 27, 2020

The six-satellite AEHF constellation circles Earth in geostationary orbit, about 22,200 miles (35,700 kilometers) above the planet. From that lofty perch, the spacecraft provide secure, jam-proof communications between government officials and warfighters on the ground.

Lockheed Martin is the prime contractor for the $15 billion AEHF network, which is a follow-on to the U.S. Air Force's Milstar communications constellation. The other five AEHF satellites launched in August 2010, May 2012, September 2013, October 2018 and August 2019. The spacecraft have a design lifetime of 14 years.

The AEHF satellites aren't the only space assets that have been deemed critical to U.S. national security. A variety of satellites meet that description, and the Space Force is committed to keeping all of them up and running despite the coronavirus outbreak, said Gen. John "Jay" Raymond, chief of space operations for the new military branch, which was officially established in December 2019. (The Space Force, by the way, resides within the U.S. Air Force, much as the Marine Corps is part of the Department of the Navy.)

"I'm especially proud of our military professionals who continue to ensure that the vital space systems remain operational in support of our nation," Raymond said in a video tweeted out by the Space Force on Friday. "Thanks to their professionalism and dedication to duty, critical capabilities such as the Global Positioning System and satellite communications are available 24/7 to enable civil authorities and safeguard our national defense."

Thursday's launch provided some rare action for space fans in these strange lockdown days. The next high-profile liftoff firmly on the docket is the April 9 launch of three new International Space Station crewmembers, who will ride to orbit from Baikonur Cosmodrome in Kazakhstan. The coronavirus pandemic has delayed a number of other planned missions, resulting in a schedule littered with "TBDs."