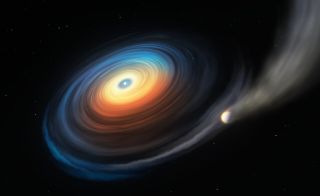 Artist's illustration of a Neptune-sized planet orbiting a white dwarf, losing atmosphere as the star's radiation erodes it away.
(Image: © ESO/M. Kornmesser)

Alien scientists billions of years from now may detect traces of Jupiter, Saturn, Neptune and Uranus in our sun's corpse.

That's because the outer layers of superdense stellar remnants known as white dwarfs may often possess the remains of giant planets, a new study suggests.

White dwarfs are the Earth-size cores left behind after average-size stars have exhausted their fuel and shed their outer layers. Our sun will one day end up as a white dwarf, as will more than 90% of all stars in our Milky Way galaxy.

Initially, the white dwarf that will result from our sun about 8 billion years from now will still be a scorching 180,000 degrees Fahrenheit (100,000 degrees Celsius). The new study estimated that such a young, hot white dwarf will blast its surroundings with extreme ultraviolet radiation levels up to a million times greater than those that come from the present-day sun; this could last for a few million years.

The sun will likely destroy Earth and the other inner, rocky planets of the solar system as the star swells and dies, the disintegrated remains of these worlds polluting the resulting white dwarf. However, until now, it remained uncertain how giant planets in the outer reaches of a planetary system — worlds like Jupiter, Saturn, Uranus and Neptune — might fare under the extreme ultraviolet rays of a hot white dwarf.

"Nobody had looked into this part of the future of the solar system," study lead author Matthias Schreiber, an astrophysicist at the University of Valparaíso in Chile, told Space.com.

Previous research analyzed how alien stars could strip away the atmospheres of giant planets in close orbits. Schreiber and his colleagues adapted this work to examine the impact that hot white dwarfs might have on cold, giant planets.

Additionally, the researchers calculated how a young, hot white dwarf might look after it had accreted material that its extreme ultraviolet rays had stripped off giant planets. The scientists found that about one-third of known hot white dwarfs showed evidence of pollution from evaporating giant worlds. As such, "observing hot white dwarfs might help us to measure the abundances of gas-giant extrasolar planets," Schreiber said.

All in all, when it comes to our solar system, "the giant planets that will survive the evolution of the sun into a white dwarf will lose a small fraction of their atmospheres due to evaporation," Schreiber said. "The white dwarf will accrete a fraction of the evaporated material, and this will result in detectable signatures, so future generations of alien astronomers, if they exist, can potentially investigate the chemical composition of Jupiter, Saturn, Neptune and Uranus."

The scientists detailed their findings online Dec. 4, 2019, in The Astrophysical Journal Letters.