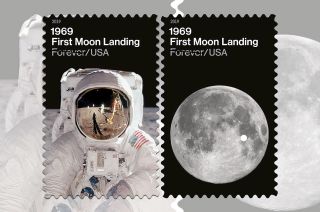 You can now use your U.S. mail to pinpoint where humans first landed on the moon.

New postage stamps issued by the United States Postal Service (USPS) on Friday (July 19) include a photo of the moon with Tranquility Base highlighted by a metallic silver dot, commemorating the 50th anniversary of the first moon landing.

A second stamp in the new Forever-denomination pair reproduces part of an iconic photograph of Apollo 11 lunar module pilot Buzz Aldrin showing the mission's lunar module Eagle, the American flag and commander Neil Armstrong in the reflection of his helmet's visor.

"It is a honor for me to represent the U.S. Postal Service as we dedicate the 1969: First Moon Landing Forever stamps, which celebrates the 50th anniversary of one of our country's greatest scientific and technological achievements," said Thomas Marshall, USPS general counsel and executive vice president, who served as the dedicating official at a first-day-of-issue ceremony at the Kennedy Space Center in Florida on Friday.

The two stamps, which each have a current face value of 55 cents, are sold in sheets of 24, with 12 of each design. The USPS is also offering a number of collectible products featuring the "1969: First Moon Landing" commemoratives, including:

The stamps are available at post offices across the United States. The philatelic collectibles are offered through the USPS stamp shop on its website.

In addition to the retail first day covers, the public can also purchase stamps, apply them to their own envelopes and send them to the USPS to create their own first day collectibles. The Postal Service will accept requests for first day of issue 1969: First Moon Landing postmarks (ink or digital color) through Nov. 19.

For the ink postmark, stamped envelopes should be sent either self-addressed or with a return envelope large enough to accommodate the canceled items and with sufficient postage affixed for return of the postmarked items to:

There is no charge for the first 50 ink postmarks. There is a 5-cent charge for each additional postmark over 50.

For the digital color postmark, some additional constraints and costs apply. No. 6 or 10 envelopes constructed of paper rated as "laser safe" can be sent, along with two required test envelopes, to the same address as above. There is a minimum of 10 envelopes at 50 cents per postmark required. Additional details can be found in the Postal Bulletin, available on the USPS website.

Additional commemorative postmarks and the addresses where to send requests can also be found in the Postal Bulletin.

The stamps mark the fourth time that the USPS has commemorated the first moon landing on postage. Starting with a 10-cent "First Man on the Moon" airmail stamp issued two months after Apollo 11 returned to Earth, additional commemoratives were released for the 20th, 25th and 30th anniversaries. With the exception of the two latest releases in 1999 and 2019, all of the stamps were designed by the late space artist Paul Calle or his son, Chris.

The 2019 "1969: First Moon Landing" stamps were designed by USPS art director Antonio Alcalá. The photograph of the moon used on one of the stamps was taken by amateur astronomer Gregory Revera of Huntsville, Alabama.

The United States is not alone in releasing stamps for the 50th anniversary of the moon landing. More than a dozen other countries' postal services also issued commemoratives honoring the U.S. mission, including Australia, Austria, Canada, France, Germany, Gibraltar, Isle of Man, Jersey, Liechtenstein, Monaco, Spain, Sweden and Switzerland.