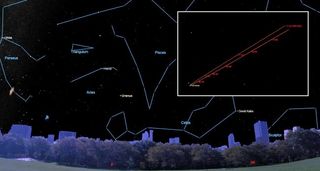 Just after midnight tonight (Aug. 12), Uranus will reverse direction and begin a retrograde loop that will last into mid-January, 2020.

Currently, the blue-ish, methane-clouded planet is moving eastward (seen in the red path in the image below). However, tonight after midnight, Uranus will begin moving westward. The planet will be at a magnitude of 5.8, which isn't very bright but is just barely visible with the naked eye.

Additionally, the brightness of the almost full moon will make viewing Uranus especially difficult. Those looking to spot the planet can find Uranus in southwestern Aries less than 5 degrees north of the star Al Kaff al Jidhmah (Xi Ceti).

Tonight, Uranus will change direction as the Perseid meteor shower peaks. The Perseids are a popular and exciting astronomical event, and skywatchers will be able to spot 10-15, possibly more, of these meteors overnight from Aug. 12 to 13. However, as the nearing full moon will make Uranus difficult to see, it will also interfere with those looking to view the Perseids.

"Unfortunately, the moon will be very close to full on the night of the peak, which will wash out the fainter Perseids," NASA meteor expert Bill Cooke told Space.com. "The Perseids are rich in fireballs, so you'll still see Perseids; you just won't see the show you've seen on nights when the moon has not been around."