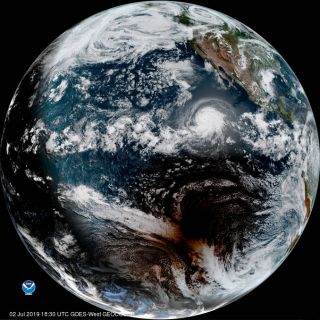 The moon's shadow passes south of Hurricane Barbara during the total solar eclipse of July 2, 2019, in this photo captured by the NOAA/NASA GOES West satellite.
(Image: © CIRA/NOAA.)

Here's something you don't see every day.

Today's event was the first total solar eclipse since the August 2017 "Great American Solar Eclipse," which crossed the U.S. from coast to coast. The next such skywatching spectacle won't occur until December 2020, when southern South America again will play host. (Total solar eclipses occur about once every 18 months.)

The United States won't be treated to another total solar eclipse until April 2024. But that will be a good one, with the diagonal path of totality extending northeast from Mexico all the way up through Canada's maritime provinces.

The spectacular photo was captured by GOES-West, a weather satellite that's a joint project of the National Oceanic and Atmospheric Administration (NOAA) and NASA.

Editor's Note: If you captured an amazing photo or video of the July 2 total solar eclipse and would like to share it with Space.com's readers, please send your images with comments to spacephotos@space.com.