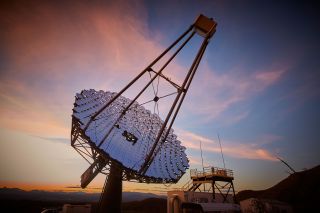 The Very Energetic Radiation Imaging Telescope Array System in Arizona was used to track asteroids as they passed in front of distant stars, providing more-accurate measurements of the stars' sizes.
(Image: © Harvard-Smithsonian Center for Astrophysics)

Astronomers found the size of the smallest star measured to date by tracking the shadows of nearby asteroids.

Most stars in the night sky are too far away to be measured accurately, even by the best optical telescopes. However, astronomers leveraged a method known as diffraction to overcome this challenge.

Diffraction occurs when an object, such as an asteroid, passes in front of a star, creating a shadow called an occultation. As the asteroid passes in front of the star, astronomers can calculate how long it takes for the star's light to fade. Knowing how fast the asteroid is traveling, astronomers can then determine the size of the star. Using this method, astronomers were able to more precisely measure the diameter of several distant stars, according to a statement from the Harvard-Smithsonian Center for Astrophysics, which oversees the observatory used in the study.

Using the VERITAS telescopes, astronomers carefully tracked the 60-kilometer-wide (37 miles) asteroid Imprinetta as it passed in front of the star TYC 5517-227-1 on Feb. 22, 2018. Roughly 300 images per second were captured to accurately measure the diffraction pattern in the asteroid's shadow.

Data from the VERITAS telescopes revealed that the diameter of the star, which is located 2,674 light-years from Earth, is 11 times greater than that  of Earth's sun. This star, now classified as a red giant, is thus much bigger than previously thought, according to the statement.

Astronomers were able to repeat this new technique when the 88-kilometer-wide (55 miles) asteroid named Penelope passed in front of the sun-like star TYC 278-748-1 on May 22, 2018. This star, located 700 light-years from Earth, is the smallest star measured in the night sky to date, the researchers said.

"Using the same formula for data collection and calculations, we determined this star to be 2.17 times the diameter [of] Earth's sun," Daniel said in the statement. "This direct measurement allowed us to correct an earlier estimation that placed the star's diameter at 1.415 times that of our sun."

The findings were published April 15 in the journal Nature Astronomy.