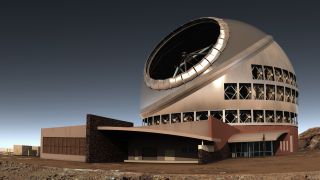 This year, however, a more terrestrial controversy echoed through both formal presentations and casual conversations at the "Super Bowl of Astronomy," which was held here last week. The debate surrounded the Thirty Meter Telescope (TMT), a massive observatory approved for construction on the Big Island of Hawaii. Specifically, it would join the astronomy-rich summit of Maunakea, sometimes written as Mauna Kea.

Astronomers say the instrument would offer deep insight into the earliest days of the universe and study mysteries like black holes and alien worlds. But a vocal subset of the native population of the Hawaiian Islands opposes the construction for a host of historical, cultural and environmental reasons. The dispute has reached such a tenor that some called the situation an "existential crisis" for astronomy.

The ongoing controversy came to a head last July, when TMT project leaders announced that they would begin construction. Kūpuna — native Hawaiian elders — and others opposing the telescope flocked to Maunakea to block the road leading to the construction site and the dozen existing observatory facilities. Local and state officials dispatched law enforcement personnel and three dozen people were arrested.

Then, stalemate: For five months, TMT opponents calling themselves kia'i, or protectors, camped out on the road leading to the summit. Eventually, they agreed to allow staff up to the existing observatories via a side road. In December, David Ige, the governor of Hawaii, announced that he would temporarily withdraw law enforcement, since telescope construction wasn't in a state to proceed. Just after Christmas, the kūpuna and kia'i moved to allow normal access to the summit, but they remained beside the road in case the situation changed again.

And then, five islands to the northwest and 6,500 feet lower in altitude, in the early days of the new year, 3,500 astronomers poured into Honolulu. They came armed with poster tubes and PowerPoint slides, ready to share and discuss a year's worth of scientific discoveries; among them were supporters and opponents of the TMT, as well as others who weren't sure either way.

The discussions unfurled throughout the conference and in a range of formats. On the opening morning of the conference (Jan. 5), about two dozen people greeted attendees in front of the convention center, demonstrating their support for the telescope with posters reading "Imua TMT," using a Hawaiian word that means to go forward.

But not all the discussions boiled down to such straightforward declarations. Near the end of the conference, a session that was a late addition to the program gave the podium to two kia'i. They shared with astronomers not their reasons for opposing the telescope, but the daily rituals they are following on Maunakea and an invitation to visit their roadside outpost.

That was a deliberate choice. "This is different, perhaps, from what you thought this would be," said Pua Case, a native Hawaiian who has been organizing against the TMT for a decade. "We're not presenting our side to get another side, we're not going to do that. You know why? Because we're meeting you for the first time, most of you."

Instead, she explained that they wanted to offer astronomers a glimpse into their world. "The way we create relationship is through ceremony, ritual, tradition, ancestral passing down of knowledge and protocol," Case said. That's also how the kia'i have arrived at their opposition of the project and how their daily prayers on the mountain continue their process of determining how to live with Maunakea. "We have no choice but to stand, so we're letting you know that," she said.

On all sides, speakers at the conference acknowledged how knotty they consider the situation to be. "One of the reasons why we're stuck is because the conversation has been restricted to a very small, binary choice," Greg Chun, a psychologist and native Hawaiian who currently leads Maunakea stewardship at the University of Hawai'i, which oversees the astronomy community's use of the mountain, said during a presentation. "We're also stuck because the ecosystem that we're trying to have this conversation is not set up to solve these problems."

"We're also stuck because everybody's right," Chun said. "Those people sitting in the middle of the road have suffered. I'm Native Hawaiian; I know the social and historical injustices and the impacts of those injustices. Similarly, TMT is right. They've done everything they're supposed to do legally."

For now, the uncertain truce on the mountain continues.

What comes next is less clear.

And the truce itself isn't very clear either, on closer inspection. Ige's statement on withdrawing law enforcement from the mountain in December read, "We made this decision after we were informed that TMT is not prepared to move forward with construction on Mauna Kea at this time."

But Gordon Squires, TMT's vice president for external relations, told Space.com that he wasn't sure how the withdrawal came about. "It wasn't initiated by us at all, although we're very hopeful that this opportunity, now this space has been created, is a space where something good will happen," he said.

As to when construction may resume, Squires called the late February time frame that has been discussed — with equally vague origins — realistic. And when asked how long TMT might be willing to wait to sort out the situation at Maunakea before moving the facility to another location, the answer was more uncertainty.

"I don't know. What I've been saying for the last few months, I guess, is we need to get started soon, but I don't know what soon means. I honestly don't know," Squires said. "Eventually, you need a home, and that time is coming where we can't continue in a place where we don't have a home to build the telescope."