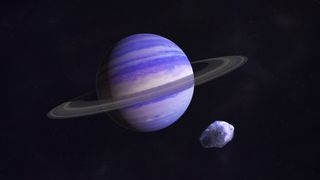 Astronomers haven't found any exoplanets with rings, but researchers have found weirdly puffy alien worlds. What if they're one and the same?
(Image: © NASA/Goddard/Francis Reddy)

All four outer planets in our solar system sport at least a few rings, but so far, we haven't observed any such features around exoplanets.

That's confusing, since these rings should be detectable with our current technology. A recent paper suggests that, actually, we've already seen ringed exoplanets, just in the form of strangely large, "superpuff" planets.

Except in rare cases, we don't get to take pictures of exoplanets directly. Instead, scientists have to infer the existence of these worlds through a series of lucky breaks. The most common method for spotting worlds around distant stars is to sit and stare at those suns for weeks on end, watching for any changes in brightness. If that star happens to host a planet, and if that planet's orbit happens to carry it in front of the face of that star from our point of view, and if that planet happens to be big enough, then scientists can detect the subtle dimming as the star's light is blocked.

This technique, known as the transit method, does indeed depend on everything lining up just right. But there are enough stars in the galaxy (hundreds of billions enough) that we've been able to spot thousands of exoplanets using this method.

Studying transits also allows scientists to determine properties of the newfound worlds. For example, astronomers can estimate a planet's size by watching how long it takes the host star to reach its minimum brightness during the transit and how much light is blocked. A larger planet takes longer to dim the star and blocks more light, and therefore is easiest to see, so plenty of these newfound worlds are giants, akin to Neptune and Jupiter.

In principle, this method should reveal rings around an exoplanet. If an alien world sports some bling, that feature ought to have some effects on the transit signal. For example, starlight peeking between the rings and the planet could cause gaps in the transit event. Some astronomers claim to have seen this, but the effect is so subtle that no instances are fully convincing, even with the biggest planets that we have studied.

Once the transit technique identifies a candidate planet, scientists can follow up, using methods that measure subtle wobbles in the star's position to calculate a planet's mass.

From the mass and size, astronomers can calculate the average density, a critical number in determining the type of planet we're staring at. Very high density? Probably made of rocks and water, something like the Earth. Relatively low density? Probably a hulking gas giant, like Jupiter or Uranus.

But as with any population, there are some oddballs. In the case of exoplanets, there are about a dozen worlds that scientists have nicknamed "superpuffs." And these superpuffs are weird indeed.

All of them are five to 10 times larger than Earth, in terms of both mass and size. With only one exception, they orbit close to their parent stars, with years as short as 15 Earth days.

But what really sticks out about these worlds is their extremely low density. For perspective, Saturn's density, 0.687 grams per cubic centimeter, is low enough that if you could make a bathtub big enough, the planet would float in the water. These superpuffs have densities as low as one-tenth of Saturn's.

And perhaps some have rings.

Rings to the rescue

The argument for ringed planets masquerading as superpuffs is simple: Rings could easily interfere with the way scientists turn the length of a transit into an estimate of the associated planet's size.

A hypothetical alien looking at Saturn via our techniques, for example, would calculate Saturn's size at twice its actual value and its density at one-eighth of the real number. A similar misperception, from our perspective, would perfectly explain the anomalously low densities of the superpuffs.

But this explanation doesn't work for all of the superpuffs. Some of these weird exoplanets orbit too close to their parent star for the idea to make sense; there, gravitational forces would tear apart any ring system. In other cases, no matter how researchers adjust the hypothesized size, structure and orientation of a ring system, they can't get it to match the precise properties of the transit signal.

Still, out of the dozen known superpuffs, the authors of the new research were able to pick out a few candidates for ringed planets. Current observation techniques aren't precise enough to confirm rings, but the upcoming James Webb Space Telescope will be precise enough. Then, we'll finally know if ringed planets are rare or common and what these mysterious superpuffs really are.

The research is described in a paper posted in November 2019 to the preprint server arXiv.org and accepted for publication by The Astrophysical Journal.

Paul M. Sutter is an astrophysicist at The Ohio State University, host of "Ask a Spaceman" and "Space Radio," and author of "Your Place in the Universe." Sutter contributed this article to Space.com's Expert Voices: Op-Ed & Insights.