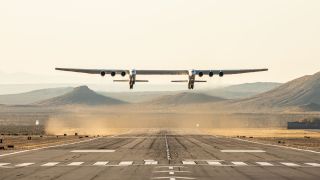 Stratolaunch's rocket carrier plane, the largest aircraft ever built, takes off from the Mojave Air and Space Port in Mojave, California during its first test flight on April 13, 2019.
(Image: © Stratolaunch)

Stratolaunch Systems is a private spaceflight company that aims to create an airborne launch system for spacecraft. It is the brainchild of Microsoft co-founder Paul Allen, who steered the company until his death from non-Hodgkin's lymphoma, a type of blood cancer, in 2018.

According to Stratolaunch's website, the space-focused Allen founded the business to "get game-changing ideas off the ground by making space launch more reliable, affordable and accessible than ever before." The company intends to create "a world where booking a satellite launch is as routine and convenient as booking a plane ticket. So more people — across more industries — can see their big ideas take flight."

When it first began in 2011, Stratolaunch teamed up with Elon Musk's spaceflight company SpaceX, which was going to build a modified version of the Falcon 9 rocket to launch from Stratolaunch's giant plane. However, the two companies parted ways within a year and Stratolaunch announced that it was considering multiple different launch vehicles.

In 2015, Stratolaunch Systems was placed under the supervision of Allen's new aerospace company, Vulcan Aerospace. The next year, the company announced that it would be using Orbital ATK's Pegasus XL rocket to launch satellites from their innovative and enormous aircraft, the Model 351 Stratolaunch.

The M351 Stratolaunch features twin fuselages and six jet engines. It is designed to fly small rockets to an altitude of about 35,000 feet (10,700 meters), then release them so they can fire their own engines and reach orbit. [Stratolaunch: Biggest Aircraft in History to Launch Spaceships (Infographic)]

The aircraft weighs 500,000 lbs. (227,000 kilograms), and it can carry another 550,000 lbs. (almost 250,000 kg) with up to three rockets under the wing at the center of the vehicle. Nicknamed "Roc," the craft has a wingspan of 385 feet (117 m) — about the same length as the International Space Station. The plane was built by Scaled Composites, the company founded by Burt Rutan that also built SpaceShipOne, which won the Ansari X Prize in 2004.

The enormous airplane's first test came in 2017, when Stratolaunch rolled it out on the runway in Mojave to test its steering, braking, anti-skid and telemetry systems. Company officials said at the time that everything operated as anticipated.

At one point, the company planned to develop its own rockets. Called the Medium Launch Vehicle, it would have been capable of placing 7,500 lbs. (3,400 kg) into low Earth orbit, the company announced in August 2018. The vehicle would have been powered by an engine called PGA, named after the initials of Paul G. Allen.

But just six months later, Stratolaunch said they would be abandoning those plans. Allen's death in the intervening time had raised questions about the company's future, since it was almost entirely funded by him.

In 2018, Roc practiced for its first flight with several taxi tests in which the craft raced down a runway under its own power, reaching a top speed of 136 mph (219 km/h) but didn't take off.

On April 13, 2019, the world's largest airplane flew from the Mojave Air and Space Port in Mojave, California, for the first time.

"The aircraft is a remarkable engineering achievement, and we congratulate everyone involved," Jody Allen, chair of Vulcan Inc. and trustee of the Paul G. Allen Trust, said in a statement released by Stratolaunch Systems, the company that owns and operates the enormous new plane.

During its first historic flight, the huge airplane stayed aloft for 2.5 hours. Roc reached a peak altitude of 17,000 feet (5,180 m) and a top speed of 189 mph (304 km/h), ending with a touchdown back at Mojave Air and Space Port. [Stratolaunch Test Photos: The World's Largest Plane in Action]

"The flight itself was smooth, which is exactly what you want the first flight to be. And for the most part, the airplane flew as predicted, which is again exactly what we want," pilot Evan Thomas said during a news conference on the same day as the flight.

Stratolaunch said back in 2018 that it expected to take 18 to 24 months to complete Roc's test- flight program and receive an airworthiness certificate from the Federal Aviation Administration. Once that's complete, the plane will be ready to serve as an air-launch platform.