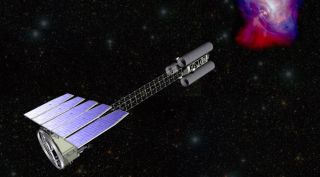 An illustration of the Imaging X-ray Polarimetry Explorer (IXPE) spacecraft, which will launch in April 2021 on a Falcon 9.
(Image: © NASA)

CAMBRIDGE, Mass. — NASA awarded a launch contract to SpaceX July 8 for the launch of a small astrophysics mission as the company offered a Falcon 9 at a lower price than a much smaller rocket.

NASA said that it selected SpaceX to launch the Imaging X-Ray Polarimetry Explorer (IXPE) mission on a Falcon 9 in April 2021 from Kennedy Space Center's Launch Complex 39A. NASA said the total cost to the agency for the launch is $50.3 million, which includes the launch itself and other "mission-related" costs.

That cost is significantly less than a NASA contract awarded to SpaceX April 11 for the launch of the Double Asteroid Redirection Test (DART) mission in June 2021 from Vandenberg Air Force Base in California. NASA estimated launch costs for DART at $69 million.

One factor in the lower cost is the use of a previously flown first stage booster. Agency spokesperson Tracy Young said July 8 that the Falcon 9 launching IXPE will have a reused first stage.

"SpaceX is honored that NASA continues to place its trust in our proven launch vehicles to deliver important science payloads to orbit," Gwynne Shotwell, president and chief operating officer of SpaceX, said in a company statement. She noted IXPE is the sixth mission the company has won a contract to launch through NASA's Launch Services Program, which handles satellite missions.

NASA didn't state if IXPE would share the launch with one or more other customers. The agency previously said that the DART launch would be a dedicated mission. NASA, though, could add its own smallsat secondary payloads to the launch if there is excess capacity.

It's unlikely that IXPE will make use of the full payload performance of the Falcon 9. The spacecraft has a mass of 292 kilograms, according to a mission fact sheet. The Falcon 9 can place up to 22,800 kilograms into low Earth orbit, although that performance will be reduced somewhat to achieve the zero-degree inclination of IXPE's orbit, at an altitude of 540 kilometers.

In that fact sheet, as well as other documents about IXPE, mission officials had baselined the use of the Pegasus XL rocket to launch the spacecraft. Flying out of Kwajalein Atoll in the Pacific, the Pegasus XL would have the performance to place IXPE into its desired orbit.

But, counterintuitively, using the Pegasus would have likely cost more than the much larger Falcon 9, reflecting the dropping prices SpaceX is charging for that vehicle as it reuses the rocket's first stage. NASA's most recent Pegasus XL contract, awarded in November 2014 for the Ionospheric Connection Explorer (ICON) mission, had a total cost of $56.4 million. That figure is unlikely to have dropped significantly in the last five years, particularly given the vehicle's low flight rate. The Pegasus last launched in December 2016, and has flown only three times in the last decade.

NASA selected IXPE in January 2017 as part of its Small Explorers program of astrophysics missions. The spacecraft will measure the polarization of X-rays from a variety of sources, from pulsars to active galactic nuclei. The total cost of the mission, including launch and operations, is $188 million.

Small science missions in astrophysics, Earth science and heliophysics had been the primary customers of the Pegasus XL. That source of business for the venerable rocket, though, could be in jeopardy with NASA's decision to launch IXPE on the Falcon 9, as well as the emergence of low-cost small launch vehicles that could seek certification from NASA's Launch Services Program in the near future.

The only mission on the manifest for the Pegasus XL is the ICON mission, which has suffered extensive delays because of technical issues with the rocket. NASA has yet to announce a new launch date for ICON.