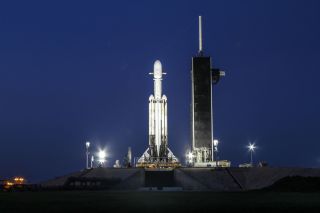 CAPE CANAVERAL, Fla. — SpaceX is waiting until late in its 4-hour window to fire the engines on the massive Falcon Heavy rocket currently sitting on a launch pad here at Kennedy Space Center.

The company announced on Twitter that it would be targeting 2:30 a.m. EDT (0630 GMT) on June 25, three hours into the launch window for the mission. The statement didn't offer any details about why the decision was made. The mission will launch two dozen satellites into orbit, including payloads for NASA, the National Oceanic and Atmospheric Administration (NOAA), The Planetary Society and a host of universities.

Related: This Is What 2 Dozen Satellites Look Like Packed for Launch on a SpaceX Falcon Heavy

The new flight, an Air Force coordinated launch dubbed Space Test Program 2 or STP-2, will also be the first Falcon Heavy mission to reuse boosters that have already flown to space, as the two side boosters are veterans of that April flight. The center core is new, after the Arabsat mission's center core landed safely but was lost overboard when choppy seas struck SpaceX's droneship.

With the new targeted launch time, SpaceX has just an hour-long window in which to complete the launch. If the company decides it isn't ready to go within that hour, it will default to a 4-hour backup window that opens June 25 at 11:30 p.m. EDT (0630 GMT) on June 26.