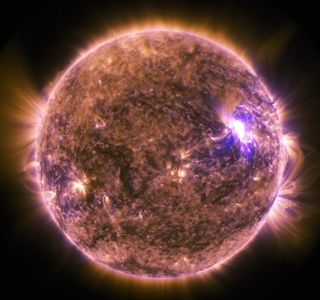 Scientists have finally captured some exotic solar activity on camera. A new study gives photographic proof that a substance called plasma on the sun sends out radio light in pulses, much like a lighthouse flashing its beam on Earth.

Plasma, which makes up most of the sun, is often called the "fourth state of matter," coming after the more familiar forms of solid, liquid and gas. Plasma is an electrically conductive gas that occurs when negatively charged electrons are stripped from the gas in a process known as ionization.

While plasma is common in space, it's found rarely on Earth, which makes it extremely hard to study. Some laboratories can re-create the cold environment of space for plasma research, but by studying the sun, researchers can see how plasma behaves in the more extreme temperature and pressure conditions found in a star, researchers said in a statement about the new work.

"The solar atmosphere is a hotbed of extreme activity," Eoin Carley, a postdoctoral researcher at Trinity College Dublin and the Dublin Institute for Advanced Studies and lead researcher on the new work, said in a statement.

In the solar atmosphere, Carley said, plasma temperatures can exceed 1.8 million degrees Fahrenheit (1 million degrees Celsius). "The light-speed particles shine bright at radio wavelengths, so we're able to monitor exactly how plasmas behave with [the use of] large radio telescopes," he added.

To image the lighthouse-like pulses that plasma emits, which scientists have known about for decades, the researchers combined radio telescope observations from the Nançay Radio Observatory, located 2 hours from Paris, with space-based ultraviolet cameras mounted on NASA's Solar Dynamics Observatory. Through this collaboration of space and ground equipment, scientists captured the radio pulses' behavior, including "how plasmas become unstable in the solar atmosphere," Carley said.

Studying plasma behavior has practical implications as well. The team said that learning about solar plasma could help engineers build nuclear-fusion plants, which have been billed as a potentially more efficient form of energy — if we could get the process to work for a long time.

"Nuclear fusion is a different type of nuclear energy generation that fuses plasma atoms together, as opposed to breaking them apart like fission does," Peter Gallagher, a senior professor at the Dublin Institute for Advanced Studies who collaborated on the research, said in the statement. "Fusion is more stable and safer, and it doesn't require highly radioactive fuel. In fact, much of the waste material from fusion is inert helium.

"The only problem," he added, "is that nuclear fusion plasmas are highly unstable. As soon as the plasma starts generating energy, some natural process switches off the reaction. While this switch-off behavior is like an inherent safety switch — fusion reactors cannot form runaway reactions — it also means the plasma is difficult to maintain in a stable state for energy generation. By studying how plasmas become unstable on the sun, we can learn about how to control them on Earth."

A paper based on the research was published May 23 in the journal Nature Communications.