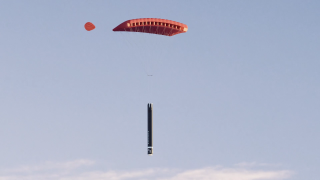 Rocket Lab plans to use a helicopter to retrieve the first stage of its Electron booster shortly after launches. During the Nov. 28 liftoff of the "Running Out of Fingers" mission, the company will gather key data to see how far it is from attempting these dramatic recoveries.
(Image: © Rocket Lab)

Rocket Lab will have a lot to be thankful for this Friday (Nov. 29), if all goes according to plan.

The California-based company is scheduled to launch its 10th mission at 3:20 a.m. EST (0820 GMT) on Friday morning, a day after the U.S. Thanksgiving holiday. You can watch the action live here at Space.com, courtesy of Rocket Lab, or directly via the company.

Rocket Lab's two-stage Electron booster will deliver seven satellites to Earth orbit, including a Japanese craft designed to create artificial meteor showers, during the holiday flight. But that's not all that's riding on this mission, which the company calls "Running Out of Fingers."

Running Out Of Fingers will also include the first guided, full-telemetry reentry of the Electron launch vehicle's first stage as part of Rocket Lab's plans to reuse and refly rocket boosters in future missions," company representatives wrote in a mission description.

"Recovery instrumentation onboard this flight will include guidance and navigation hardware, including S-band telemetry and onboard flight computer systems, to live-gather data during the first stage's atmospheric reentry, as well as a reaction control system to orient the booster," they added.

Both SpaceX and Blue Origin bring their boosters down for vertical touchdowns that are aided by descent-slowing engine burns. But trying to do the same with the 57-foot-tall (17 meters) Electron isn't possible without beefing up the vehicle considerably, Rocket Lab CEO Peter Beck has said. And doing that would fundamentally change the company's business model, which focuses on launching small satellites frequently and cost effectively. (The Electron is capable of lofting about 500 lbs., or 225 kilograms, of payload on each roughly $5 million launch.)

So Rocket Lab will employ a very different recovery strategy, plucking falling Electron first stages out of the sky with a helicopter.

You won't see such dramatic action on Friday morning. But all the fancy guidance and navigation gear flying on Running Out of Fingers should help Rocket Lab ascertain how close the company is to recovery and reuse, Beck told Space.com in September.

About 70% of the time and money spent building Electrons goes into the rocket's first stage, he said. So, recovering and rapidly reflying Electron first stages will allow the company to ramp up its manufacturing cadence considerably.

"It's not about cutting costs at all, to be honest," Beck said. "It's about increasing production. That's the sole reason we're doing it."

And increasing production is key to Rocket Lab's vision: The company eventually aims to launch once per week or perhaps even more frequently, thereby significantly increasing access to space for small-satellite operators.

Rocket Lab is bidding to boost access in other ways as well. For example, the company recently debuted a robot named Rosie that is dramatically speeding up the Electron-manufacturing process. And Rocket Lab will officially open its second launch site, at the Mid-Atlantic Regional Spaceport on Virginia's Wallops Island, next month. (All Electrons to date have lifted off from Rocket Lab's New Zealand launch site, as Running Out of Fingers will.)

In addition, the company is developing a satellite platform called Photon that's designed to integrate a variety of payloads, freeing customers from having to build an entire spacecraft themselves. The first Electron-Photon mission will likely launch next year, Beck said.

The artificial-meteor satellite flying on Friday, known as ALE-2, was built by Tokyo-based company Astro Live Experiences. The other six spacecraft manifested on "Running Out of Fingers" are 2-inch (5 centimeters) PocketQube microsatellites built by satellite manufacturer and mission management provider Alba Orbital.