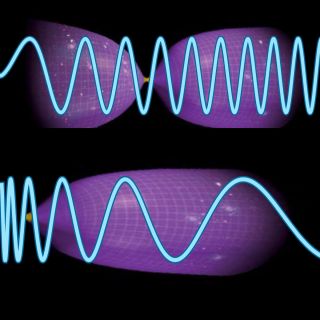 To see if there was a universe before the Big Bang and understand how the cosmos evolved after it began, researchers suggest looking for the influence of particles that acted like clocks.

Currently, the prevailing view in cosmology is that in the first few moments of the universe, the cosmos experienced an incredible burst of expansion known as inflation. During this growth spurt, space itself expanded faster than the speed of light.

Inflation can help solve a variety of mysteries about the structure and evolution of the cosmos. For example, inflation would have evened out the universe's composition, explaining why it looks mostly the same in every direction.

However, critics of the inflationary theory of cosmology argue that it requires unlikely starting conditions for the universe and that increasingly contrived models are needed for inflation to explain the latest data on the cosmic microwave background radiation, the universe's oldest light, said study co-author Avi Loeb, chair of astronomy at Harvard University.

"The most natural, plausible models of inflation have been ruled out," Loeb told Space.com. "And a very flexible theory of inflation that can accommodate any scenario, where everything is possible, is a bit worrisome — the strength of a scientific theory is that it can predict certain outcomes and rule out others."

Scientists have developed other, very different cosmological models that may solve the same cosmic mysteries that inflation does. For example, inflation assumes the universe began as a singularity, an infinitely dense point of matter and energy. In theory, singularities curve the fabric of space and time to an infinite extent, such that nothing existed before the Big Bang, not even time. However, another cosmological model suggests that the cosmos was born from a "Big Bounce," expanding outward after an earlier primordial universe collapsed. Like inflation, this model can explain why the universe looks the way it does, Loeb said.

Now, to help decide between inflation and these other ideas, Loeb and his colleagues have suggested a test to see if they are potentially false.

"Science makes progress with evidence, not belief, so we want to find clues to convince us that one scenario or another took place," Loeb said.

The key to this test is how the universe behaves in these different cosmological models, said study co-author Zhong-Zhi Xianyu at Harvard University. Inflation suggests that the universe expanded exponentially, while the Big Bounce posits that a primordial universe contracted and then our current universe expanded; some models conjectured that any change in size happened very slowly, while others proposed it occurred very quickly, he said in a statement.

If a primordial universe existed before our cosmos, our current understanding of physics suggests massive particles would have existed that would have oscillated at some regular frequency, like a clock's pendulum swinging back and forth. The fluctuations of these "primordial standard clocks" would have resulted in tiny irregularities in the density of matter on minuscule scales that would have become the seeds of structures on cosmic scales in our universe after it expanded.

"If we imagine all of the information we learned so far about what happened before the Big Bang is in a roll of film frames, then the standard clock tells us how these frames should be played," study lead author Xingang Chen at Harvard University said in the statement.

If a primordial universe once existed, its collapse would have squeezed the ticking primordial standard clocks in ways that one might detect in the structure of the current universe.

"If a pattern of signals representing a contracting universe were found, it would falsify the entire inflationary theory," Xianyu said in the statement.

There are several current and future sets of data researchers could analyze to look for these fingerprints. One involves large-scale surveys of the sky, such as the Sloan Digital Sky Survey or the upcoming Dark Energy Survey, Wide Field Infrared Survey Telescope (WFIRST) or the Large Synoptic Survey Telescope (LSST), Loeb said. Scientists could also look at the cosmic microwave background radiation, he added.

"We've identified observable details that could rule out inflation," Loeb said. "It's quite possible that inflation did take place, but it's always nice to have the ability to tell if ideas that are popular are also correct."

The scientists detailed their findings in a paper accepted by the journal Physical Review Letters, which is currently available on the preprint website ArXiv.